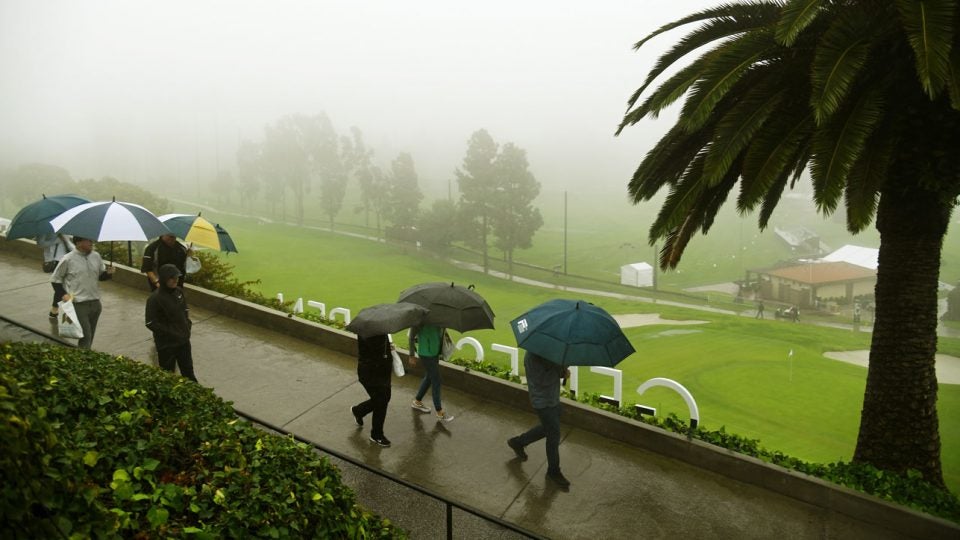 The first round of the 2019 Genesis Open will be re-started and early scores erased on Thursday after rain storms wreaked havoc on the tournament.

The early tee times went off as planned Thursday morning, with several groups playing as many as two holes before storms intensified at Riviera Country Club. Play was officially suspended at 7:30 a.m. PT, and the players went in to the clubhouse to wait out the storm.

But the rain didn’t let up. At 9:35 a.m. PT, the PGA Tour Communications Twitter account announced that once first round play resumed, all existing first round scores would be reset.

The next update at the @genesisopen will be made at 1 p.m. PT. When play resumes, all R1 scores will be reset.

10 groups had teed off at the time play was halted.

The tweet noted that 10 groups had teed off in the morning. That means 30 players will have to re-start their first rounds once (or if) the rain stops. It’s an unfortunate turn of events for those of the early starters that made birdies on the first two holes.

The last time a round was reset and scores were wiped out on the PGA Tour was the third round of the 2013 Deutsche Bank Championship.

It’s unlikely that Tiger Woods, who was supposed to tee off at 3:22 p.m. ET, will end up playing any golf on Thursday.

We will update this post when tournament officials provide further information.