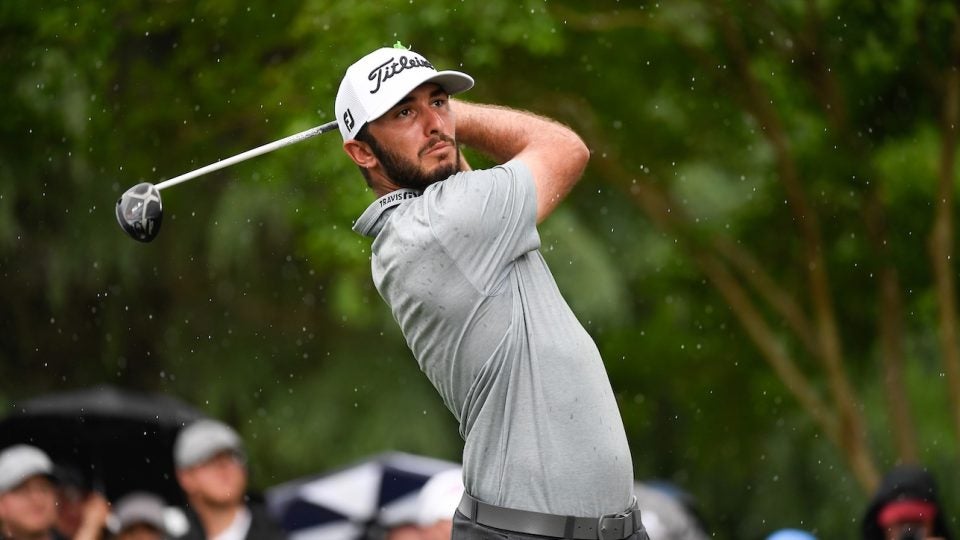 You never have to wonder what Max Homa is thinking. The 28-year-old is refreshingly honest when it comes to the state of his golf game, including the Titleist gear in his bag. Coming off his maiden PGA Tour title at the Wells Fargo Championship, Homa spoke with GOLF equipment editor Jonathan Wall about his current setup.

Homa went in-depth on a number of topics during the interview, from why he’s so laid-back when it comes to his clubs, recent wedge work he did with Aaron Dill, winning with Titleist’s TS4 driver, and the one club that jumpstarted his season.

Are you more technical or laid-back when it comes to your equipment?

Homa: I’m a go with the flow kinda guy. I actually spent the most time this week I’ve ever spent in the Titleist truck [Vokey wedge rep] Aaron Dill, the wedge genius. I was trying to get a better grasp on grinds, and how bounce works in different types of grasses. That’s the most time I’ve spent really learning about it. I felt like I had been struggling with my chipping, and I felt like I didn’t really understand the interaction between the golf club, ball and turf. I usually let the smart people tell me how it works.

So what’s a wedge conversation between you and Aaron Dill look like?

Homa: What I love about Aaron, was I told him, “I think I need more bounce.” And he told me, “Okay, why?” I gave him a whole reason of what I thought about for a couple days. He came back with me and said, “You know what? I think the exact opposite.” I love that he’s not a yes-man in that regard; he gives true, honest opinions. Of course, he was right, which is awesome. He’s obviously a very smart, well-informed guy. It was a change I didn’t think I was going to make in that direction. But, when he explained why we did that, it made a lot of sense. Low and behold, obviously it worked out pretty good.

How much bounce did you take off your wedges?

Homa: Four degrees [on the Vokey SM7 lob wedge]. I had an eight-degree M Grind, and now I have a four-degree L Grind.

I’ve been told by guys in the Titleist Tour truck that you don’t spend a ton of time in there on a week-to-week basis. Do you conduct equipment testing and tinker at home?

Homa: I enjoy testing the product, but I feel like I can see it pretty good. Having a TrackMan with the amount of time I spend testing, improving what I’m seeing. But, I also think that just in general, it’s pretty easy to see when a ball’s not spinning, or when it’s spinning, or when it’s performing appropriately. I’m not super technical with all that stuff.

Bryson’s super smart. I am not. I don’t try to be. When I can see it’s functioning properly, or poorly, I don’t need much more info than that. I would say that the only thing that I did find that I needed to get a little better at this year is paying more attention to my specs. So just because I’m hitting a squirrely shot here or there, I don’t need to immediately go into blaming myself. It’s a fine line. You don’t know if you’re kind of being a baby about it, or if you’re actually maybe fit wrong for a certain club.

A few years ago, I actually had a little bit of a dent in my 3-wood. I just assumed that I wasn’t hitting it well, so that can happen. I’m trying to be a little bit easier on myself and not hit a bad shot and immediately blame myself. In general, go with the flow. Like I said, these guys [in the Titleist truck] are so smart, they’re so good. They’re so good to me, that I know that what they fit for me is pretty darn good.

What was it about Titleist’s TS4 that made you switch drivers?

Homa: I liked that it was smaller. I’ve never been a guy who likes the spaceship driver head shape. That was kind of a big reason I liked TS3 more, but then when I went to TS4, it was even more so like that. The numbers kind of spoke for themselves. I’d hit a spaceship driver if it had these numbers.

To be honest, I’ve been searching probably my whole professional career for a driver that’s lower spin, but not absurdly low. I remember really wanting to go to 915 D4, but my misses were 1600 to 1800 [RPMs], and it’s just I don’t hit it quite straight enough, to build a flirt with — I call it driving on ice — those numbers. The TS4 one was finally was the perfect happy medium for me, personally. That’s why I threw it straight in the bag, because it was pretty clear right away that it was a lot further, especially when it hit the ground. There was also no difference with the flight, as far as curvature.

How much spin did you knock off moving to TS4?

Homa: It wasn’t dramatic on the perfect ones; it was maybe 100 to 200 RPMs. But, it was the misses. My misses with the TS3 might’ve been closer to 3300. Whereas, I remember doing TrackMan on the range on Wednesday and I looked and it was 2900. Obviously, a spin drive that you get away with a little bit more. I know on the 10th hole [at Quail Hollow], there was more spin on that shot and it still got out there a decent distance. You know, it was a bad swing, and you shouldn’t be nuking a bad swing. It held its line, but it also wasn’t crazy with the spin. That’s what I love about this one.

You missed five cuts earlier in the year and immediately switched to Titleist’s new Pro V1 and a Scotty Cameron T5 W putter and seemed to find a groove. Was there a correlation between your play on the course and those gear changes?

Homa: The ball is great, I love the ball. It was very similar, but it was a shade more consistent. I don’t feel like it curved quite as much. But the big key was I just made like a bit of a swing change. I went to a cut, instead of a draw off the tee.

But, the biggest jump as far as the equipment was the T5 W putter. I had never played a big putter before. I played a Newport my whole life before deciding I was finally going to try a bigger putter. When I went to the bigger Scotty Cameron, it made a world of difference.

What was the biggest difference going from a blade to a mallet?

Homa: It kind of swung itself a little bit more. I felt like I could kind of take my hands out of it, just a little bit. It was easier to keep the face square, and I had been struggling with a little bit of face rotation. All the sudden, I had a Monday qualifier for the Phoenix Open and had some success with that putter. I started to really like the look of it, and the rest is kind of history for the next few weeks. I played a lot better golf. So, obviously the ball helped, but in general, I would say that putter was a huge deal for me.

I will say, as a Newport guy for most of my life, it was really hard getting used to the shape. What’s funny is I test nothing really ever. I’m pretty quick with it. But, with the putter I bought three putters to the green every day. I had two mallets, one of which I’m using now, and then my Newport. I went every day for quite some time, would go back and forth, back and forth, and really try to dissect what was better. What’s great about putters, is it’s a little easier to feel.

I think that that helped me get used to it a bit quicker. Putting it in play in a tournament was weird. I was just so used to being that guy with a Newport style head. But, I’ll tell you, you play your first competitive round, and you shoot seven under, or whatever it was. You get used to it real quick. 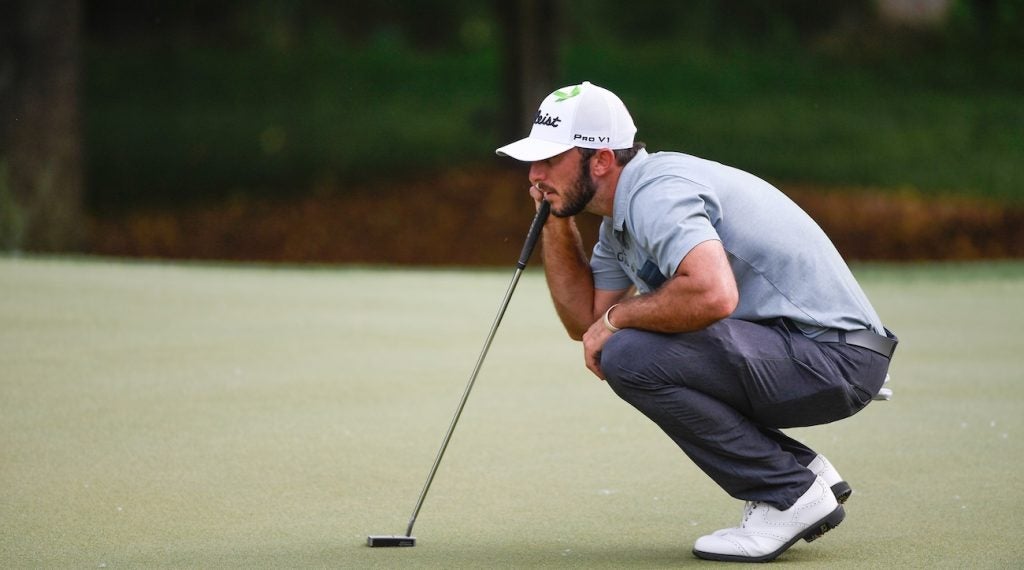 I know you’re friends with Justin Thomas, and he made a similar move from a Newport to a mallet. Did his success with the mallet resonate with you at all?

Homa: Rarely do I look at what other guys are using. But I knew he was using this particular one. I call it the Justin Thomas putter, because that’s the one he was playing with for a while. So, I guess I kind of related it to him, and maybe putting it down kind of gives you like a, “Oh man, some good vibes on that front.” Everybody’s different. I’ve played the same muscleback irons my whole life. If everybody went to cavity-backs, I wouldn’t be looking into those. You kind of know what works.

When a new driver comes out, you can talk to guys and be like, “Hey man, what do you like about this? What don’t you like about it?” If that kind of matches what I’m looking for, then I would kind of take a gander into that whole new scheme, possibly. Putters is personal, what fits your eye.

I saw you have a Titleist 818H2 hybrid in the bag. As a high swing-speed guy, is that a course-dependent club or something that has a permanent spot?

Homa: I have a T-MB 2- and 3-iron that will go in for tournaments like the British Open, but with the hybrid, I’ve found that I actually don’t need to switch it in and out quite as much. Ever since I put it in, I feel like it’s been performing so well that I still haven’t really felt any change. It’s actually been pretty good off the tee, and it’s been fantastic going into the green, and actually been good around the green. It hits my numbers and I don’t feel like I’m getting that hot spot that I used to get with other hybrids.

How long have you been using a Vokey pitching wedge instead of one that matches your iron set?

Homa: I can’t remember when I switched, but I played a pitching wedge that matched the set for a while. I remember a few years ago someone mentioned there was a better chance of catching a flyer or hitting a longer pitching wedge with the one from the set. And that’s something I don’t want. I’d rather it be a little bit more predictable. I rarely catch a heater off the face and it’s super easy to guess where it’s going to go, and how far it’s going to go with the Vokey version.