‘There’s nobody telling me where the ball is’: Jon Rahm penalized for stepping on ball

ST. LOUIS — Jon Rahm drew an unfortunate break on his 17th hole Friday when he was penalized for stepping on his ball. Walking down the left rough line on the 8th hole at Bellerive, Rahm accidentally grazed his golf ball with his foot. Rahm then called over a rules official to confer.

Rahm was forthright with the official about having touched the ball but clearly frustrated that his ball had not been marked by a spotter, which is typical in the rough at most Tour events. Broadcast cameras picked up his exchange with the rules official, which is below.

Rahm: “So, nobody was marking where the ball was, so I didn’t know…I definitely feel like I touched it with the top of my foot and you can tell I went like that. I know I touched it, I don’t believe I moved it at all, to be honest. It was right on the top…”

Rules official: “If you definitely feel like you touched it then there would be a penalty for that.”

Rahm: “I mean, there’s nobody telling me where the ball is…” 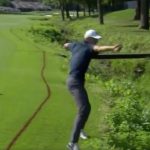 You may also like WATCH: Jordan Spieth spikes ball in water in rare on-course meltdown

Official: “If you’ve touched it with your foot, then the penalty is going to go against you.”

Official: “What we’re gonna do it replace it to where it was before.”

Rahm: “I can’t tell you where it was before.”

Official: “In which case we’re going to drop it.”

Official: “So you don’t know where it was before?”

Official: “That’s fine, so in that case we’ll drop it.”

Rule 18-2 reads as follows: “When a player’s ball is in play, if…the equipment of the player or his partner causes the ball to move, the player incurs a penalty of one stroke.”

Rahm and Hayes thanked the official for his help and then regathered to tackle the next shot. Rahm pulled 3-wood but was quickly talked into a layup at the par 5. That was a good call: Rahm advanced his ball down the fairway with a seven-iron, leaving 58 yards to the flag. He stuck his wedge shot just inside eight feet and drained the putt for a hard-earned par. It was clear how much the putt meant: Rahm punctuated the ball dropping with several fist-pumps.

The unusual save also kept Rahm bogey-free for the day; he shot 67 and was sitting T8 when he finished.