‘Time for a rejuvenation’: Inside the course changes at Kapalua’s Plantation course

Now, shake off that winter chill and look to the west.

It’s balmy on Maui. The humpbacks are breaching.  And the first PGA Tour event of 2020 is about to begin.

Born in Las Vegas, in 1953, the event known today as the Sentry Tournament of Champions has been held at the same site since 1999: the Plantation Course in Kapalua.

This year, though, the layout will have a different look and feel, thanks to a recent facelift by the course’s original architects, Bill Coore and Ben Crenshaw.

“It was time — time for a rejuvenation,” Coore told GOLF.com

Here’s what you need to know about those changes — and the competitors who’ll face them — before play in Kapalua gets underway.

Field: It’s made up of 34 winners from the 2019 calendar. Tiger Woods, though eligible, did not commit. Ditto Brooks Koepka, Rory McIlroy and Phil Mickelson. But eight members of the United States Presidents Cup team will be on hand, as will bomber Cameron Champ, first-time winner Collin Morikawa and Twitter sensation (and 2019 Wells Fargo champ) Max Homa.

Why the changes: “Golf courses are living, breathing creatures, and they evolve,” Plantation co-designer Coore says. In this case, though, the evolution was hastened by climate change.

In recent years, shifting rain and wind patterns on Kapalua (which ranked 24th on GOLF’s 2017 list of Top 100 Courses You Can Play) had altered playing conditions, tenderizing the turf and turning the course into a softer target than the firm, fast layout it had once been. That made things too easy on the Tour pros, who can tear apart soft tracks no matter how far back you put the tees, and too long and tough for resort golfers, who could no longer rely on bounce and roll. The recent work was meant to reverse those trends by reviving the original firm, fast conditions and reintroducing the quirks of the ground game: a more compelling challenge for the world’s best players, and a fairer test for the rest of us.

What they changed: They’re calling the work a “refinement,” not a renovation. The Plantation’s routing has not been touched. But the entire course has been re-turfed (to durable, drought-tolerant Celebration Bermuda); all the greens and bunkers have been re-built, and new professional tees have been added to sharpen the tournament test. A number of the greens have been enlarged, creating more viable pin positions, while some of the wildest contours have been calmed, making the putting surfaces more manageable for the mortals who play the course throughout the year. 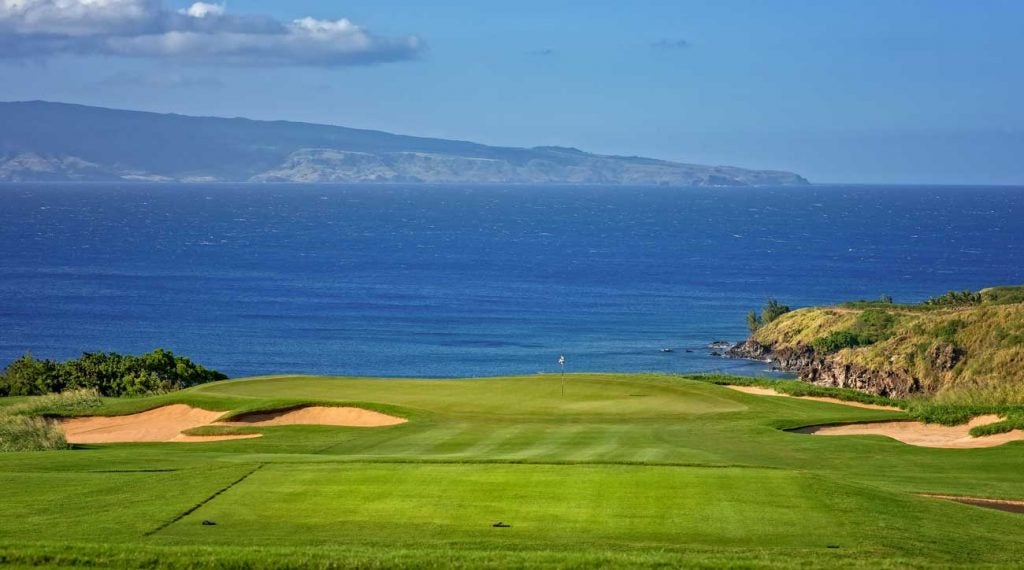 What will never change: You hear it every year when the Masters rolls around: television flattens courses. Maybe so. But there’s no disguising the rise and fall of the Plantation Course, which features more dramatic elevation changes than any stop on the PGA Tour, with holes that swoop along the shoulder of the Kahalawai Mountains. The high point of the course is 510 feet. It’s also an expansive property, with a footprint of roughly 316 acres (including the gorges that the routing works around). For comparison, the Tour’s next stop after Kapalua will be the Sony Open at Waialae Country Club, on Oahu, which covers roughly 120 acres and has a maximum elevation change of about 10 feet.

How it’s playing now: When the Plantation Course first opened in 1992, “it was meant to play like Royal Melbourne, firm and fast,” says longtime golf broadcaster and Kapalua resident Mark Rolfing, who was involved in both the original construction and the recent refinements. As Rolfing sees it, it’s no accident that Australians Stuart Appleby and Geoff Ogilvy combined to win five times over the first 10 years that the event was held at the course.

This year, there are no Aussies in the field. But much of the Sandbelt bounciness is back, despite a recent spate of rain on Kapalua, so expect to see more of the ground game from the pros and less of the same-old aerial assaults.

Earlier this week, Rolfing spoke with Johnson after DJ had wrapped a practice round. “He said, ‘You definitely made it harder.’” Rolfing says. “I wouldn’t say that simply making it harder was the goal. But a more compelling challenge — that was the intent.”

At last year’s Sentry, Gary Woodland, entering the final round with a three-stroke lead, shot five-under and still lost to Schauffele’s course-record-tying 62. “Put it this way,” Rolfing says. “I don’t expect something like that this time around.”