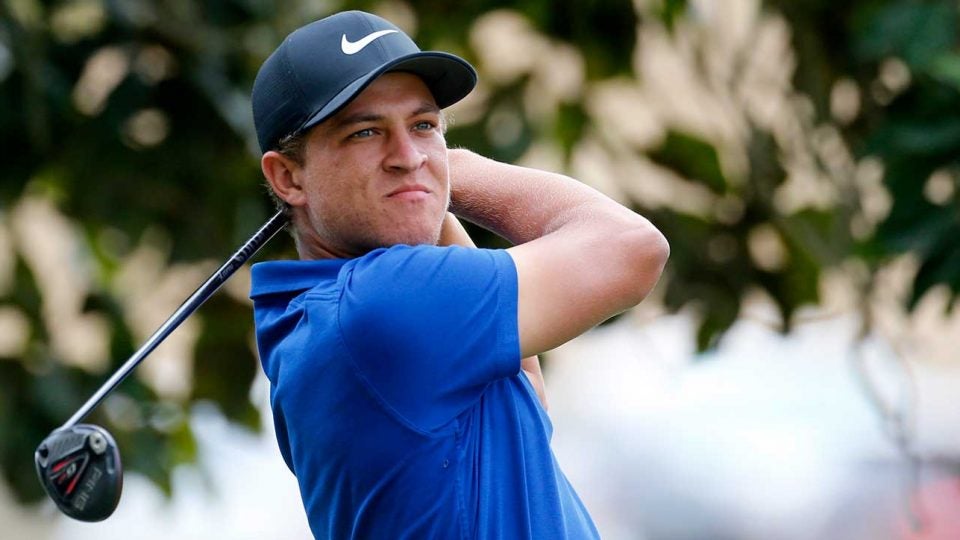 Cameron Champ tees off during the final round of the Safeway Open on Sunday in Napa, Calif.
Getty Images

Cameron Champ picked up his first and only PGA Tour victory during the 2018 fall season, and he was in great shape to win No. 2 at the Safeway Open at Silverado Resort and Spa in Napa, Calif. Here’s what you missed on Sunday.

How it happened: Champ had a three-stroke lead to begin the day, led by as many as five early on Sunday and made the turn in three-under 33 to hold a big edge over Marc Leishman (three back) and Justin Thomas and Adam Hadwin (both four back). But after making seven straight pars to begin the back nine, things got interesting during the last two holes. Hadwin made back-to-back birdies on 16 and 17 to get to 15 under, and just a few minutes later Champ missed the green on 17, couldn’t get up and down for par and made bogey to drop to 16 under and have his lead shrink to one. On the par-5 18th, Hadwin pitched his third shot to four feet and made birdie to tie Champ for the lead. After smacking a 369-yard drive off the tee, Champ had 197 into the green but missed it short and left with an eight iron. He hit a good chip to inside four feet and then drained it to win. An emotional celebration with his family ensued.

What it matters: The long-hitting Champ won the Sanderson Farms last season for his first PGA Tour victory, but he struggled with injuries and meeting lofty expectations the second half of the season and his play fell off. But Champ, 24, was also playing with more on his mind this week. He commuted from Sacramento — about an hour away — all week to spend more time with his grandfather, Mack Champ, who has stage four cancer and is in hospice. Mack got Cameron started in golf, and Cameron has been honoring his grandpa all week on his shoes and glove.

Best chip after a bad chip: Champ missed the green on the par-3 11th and then chunked his birdie chip. At least he made up for it on the next, which saved par and preserved a three-shot lead at the time.