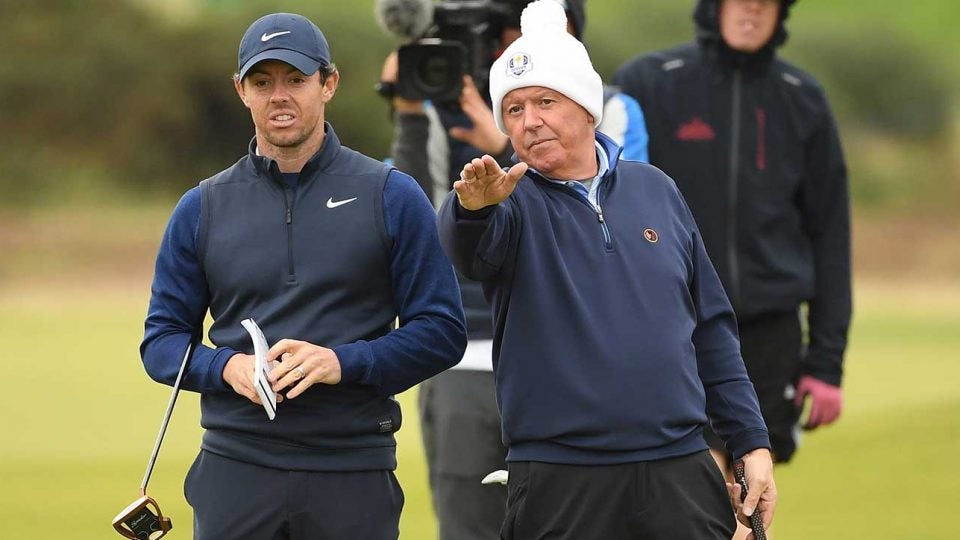 Rory McIlroy and his dad, Gerry, look over a shot at the Dunhill Links Championship in Scotland.
Getty Images

Rory McIlroy and his father were contending in the team event of the Alfred Dunhill Links Championships in Scotland, but turns out a tiebreaker rule McIlroy wasn’t even aware of decided the winner.

McIlroy and his father, Gerry, shot 61 on the Old Course in St. Andrews on Sunday and finished the team event 39 under overall to tie Tommy Fleetwood and his amateur partner Ogden Phipps. But there would be no playoff here. The tiebreaker for the team event is the low score in the pros’ final round, and Fleetwood’s 64 beat McIlroy’s 67.

Gerry McIlroy, a 2 handicap and member at ultra-exclusive Seminole Golf Club in Juno Beach, Fla., contributed a handful of net eagles and, his son says, shot two or three under on his own ball on the back nine the last two days.

“He’s played really, really well,” Rory McIlroy said. “He’s had a great time as we’ve both had. It’s been fun to get back here, and this is probably the first time we’ve been in contention to win the team event, as well, so it was good fun.

“We didn’t actually know it was the lowest pro’s score [as the tiebreaker], which I think is a bit unfair,” he continued. “It should be the lowest team score and we would have won it, but it’s been a great week.”

Victor Perez shot two under on Sunday to finish 22 under overall and win the individual title by one over Matthew Southgate. McIlroy tied for 26th.