‘One of the worst days of my life’: Brooks Koepka ‘heartbroken’ for Ryder Cup fan who lost vision

Brooks Koepka’s fears were realized Tuesday when the woman he hit with a tee shot at the Ryder Cup announced she had lost vision in her eye.

Speaking to reporters Wednesday at the Dunhill Links Championship, a ‘heartbroken’ Koepka offered his condolences to Corine Remande, saying, “Yesterday was one of the worst days of my life.” 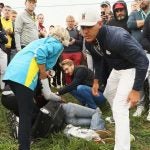 During his Friday match at Le Golf National, Koepka’s shot on the par-4 6th hole struck Remande, 49, in the eye. Koepka rushed over to Remande’s side at the time of the incident as first responders rushed to the scene.

That night, Koepka shared his hopes that she would be alright, saying, “She was bleeding pretty good. It looked like it hit her right in the eye, so hopefully there’s no, you know, loss of vision or anything like that.” 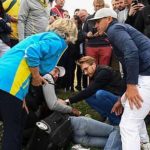 But upon leaving the hospital, Remande said a scan confirmed her eyeball “exploded” and her eye socket was fractured. Surgeons were reportedly able to sew the eyeball back together, but permanent damage seems to have been done. She also acknowledged that she planned to sue the event organizers for her injuries.

On Tuesday, Koepka said he wasn’t given an update on Remande’s condition until he arrived at the Dunhill, and that the incident was weighing heavily on him.

“Nobody feels worse about this than me, and it’s messed me up inside. I’m heartbroken. It’s one shot I definitely regret and hopefully I can speak to her.”

Earlier in the day, Koepka took to Twitter to offer his apologies, and confirmed he had been in contact with the Remande’s family.