Masters 2019: Here are the 11 juiciest Masters controversies of all time

The Masters prides itself on being the greatest golf event in the world. And more often than not, it achieves that goal. But you can’t climb to the top without a few bumps along the way. Here’s a look at the biggest Masters controversies from in and around the tournament.

Arnold Palmer and Ken Venturi, paired together on Sunday, enter Amen Corner while chasing their first respective green jackets. Palmer’s tee shot on the par-3 12th flies the green and plugs into the soggy bank between the fringe and the bunker. An official on the scene refuses to give Arnie a free drop. Palmer chops out of the plugged lie and barely advances the ball, eventually making a double-bogey 5. He then returns to the original spot and declares that he will play a provisional and drops near his original spot on the bank. He gets that second ball up and down for par. As Palmer and Venturi play 13, a rules official buzzes over and announces that Palmer’s second ball would count, and his score of 3 would stand. Venturi is rattled, and Palmer goes on to win his first green jacket by one shot. Venturi reportedly stews about the ruling for the rest of his life.

CBS broadcaster Jack Whitaker refers to Augusta’s sprawling, 18th-hole gallery as a “mob,” and he’s summarily bounced from the telecast for five years before returning in 1972. 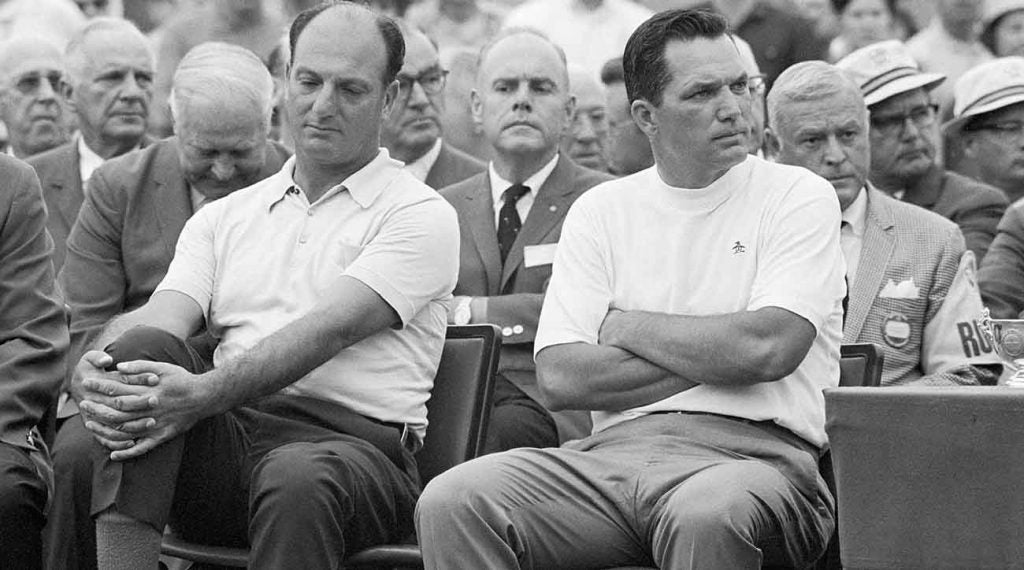 The Masters appears to be heading for an 18-hole playoff between Roberto De Vicenzo and Bob Goalby, when both men finish their Sunday rounds at 11 under…until the scorecards are submitted. De Vicenzo’s playing partner, Tommy Aaron, records De Vicenzo’s score on 17 as a par instead of a birdie, and in one of the most stunning gaffes in major championship history, De Vicenzo signs the card without catching the error. He is forced to accept the higher score and misses the playoff by one agonizing shot.

Careening down the trail first blazed nearly 30 years earlier by Jack Whitaker, Gary McCord draws the members’ ire when he refers to Augusta’s fiery greens as “bikini waxed.” After years of pushing the limits with his one-liners, this one seals his fate. He hasn’t called another Masters since.

After Tiger Woods storms to his first major title at age 21, former champ Fuzzy Zoeller is asked about Woods’s upcoming champions dinner. The veteran pro quips, “Tell him not to serve fried chicken . . . or collard greens or whatever the hell they serve.” Zoeller apologizes, but the remark remains etched in Masters history.

Five years after Woods’s 12-shot victory and one year after he capped his “Tiger Slam” with another convincing win, Augusta initiates extensive renovations that come to be dubbed “Tiger Proofing.” More than half the holes are stretched for the 2002 event, and later trees are added on holes 11 and 15, among other spots. Fairways are narrowed and rough, or a “second cut,” is added. Augusta has continued to make tweaks to the course ever since, including a stretched out par-4 fifth hole, which will debut at this year’s event. 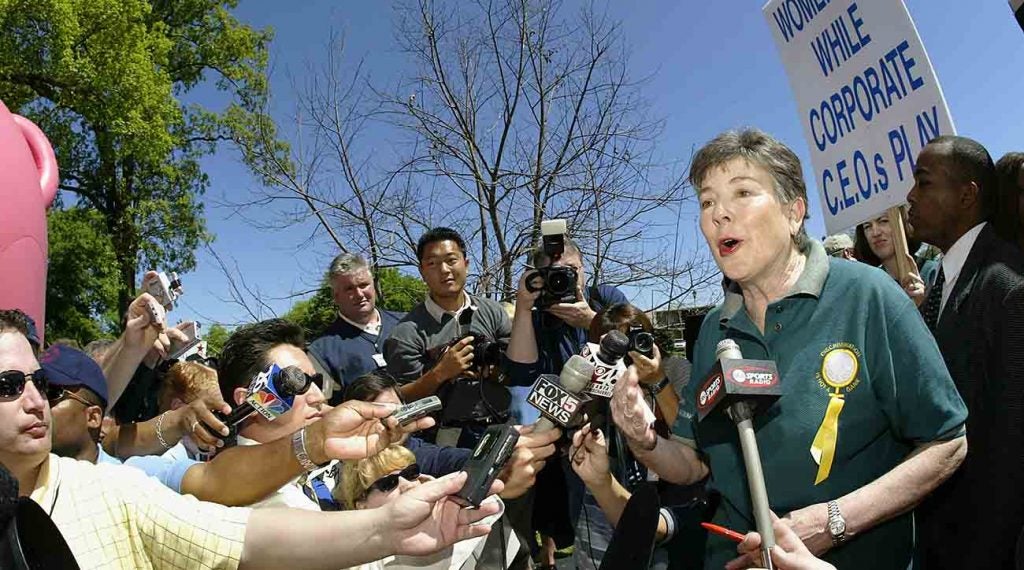 Martha Burk at the mic in 2003.
Getty Images

It’s arguably the biggest controversy Augusta has ever faced. Women’s rights activist Martha Burk leads a very public battle with the club over its men-only membership policy. When Burk writes to then-chairman Hootie Johnson, he responds, saying that Augusta won’t be pressured to change its policy “at the point of a bayonet.” Burk organizes a rally at the ’03 tournament, which only draws about 40 fellow demonstrators, but the cause resonates. Johnson drops all corporate sponsorship for both the 2003 and 2004 tournaments, and Augusta’s membership policy remains in the headlines for several years until finally, in 2012, ANGC admits its first two female members: former Secretary of State Condoleezza Rice and South Carolina banker Darla Moore. 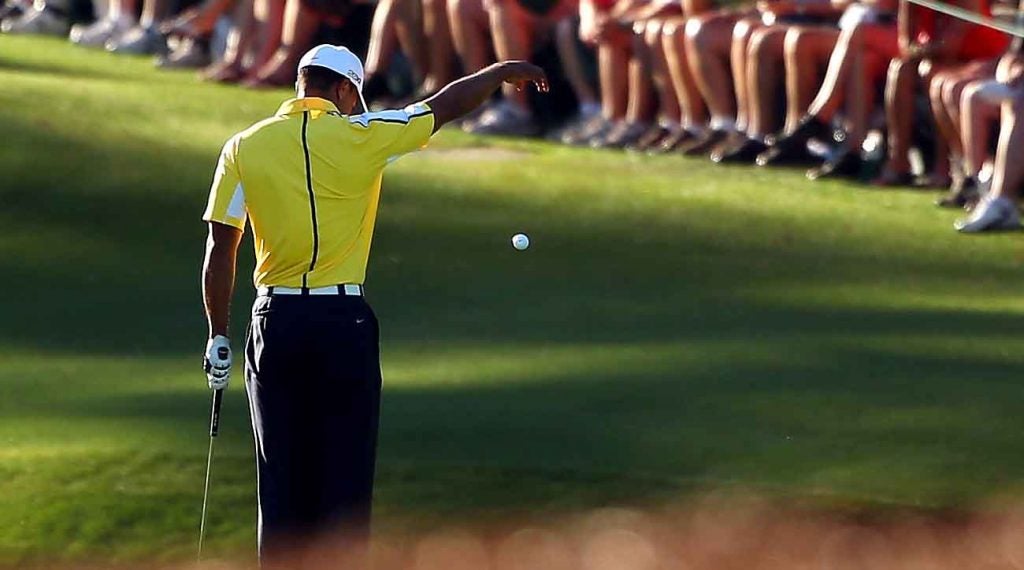 Tied for the lead on Friday afternoon, Tiger Woods hits a wedge into the par-5 15th hole. The ball clangs off the flagstick and sucks back into the pond. Woods takes a drop and plays away. But that evening rumors swirl that Woods may have taken an incorrect drop, and TV replay quickly confirms it. Would the Masters penalize Woods and then disqualify him for signing an incorrect card? On Saturday morning, Augusta hits Woods with a two-shot penalty, but doesn’t DQ him. Instead, in a surprising interpretation of the rules, the club accepts responsibility for not informing Woods sooner of his violation. Woods never climbs back into the lead, eventually tying for fourth, and the ruling is dissected for years to come.

Slow play is the scourge of today’s Tour, but the Masters takes bold a stand against it in 2013… and the target is a 14-year-old Chinese amateur. After being warned about his pace early in Round 2, Guan Tianlang is slapped with a one-shot penalty on the 17th hole. Critics wonder if it’s fair to punish a young am, but Tianlang still makes the cut and finishes 58th.

The Masters continues to grow, and members seem to have concluded that the club’s footprint should expand with it. Augusta National has reportedly purchased more than 100 acres of property outside its gates, often paying more than market value for businesses and homes in its path. (Some homeowners refuse to sell.) ANGC also reroutes and widens Berckmans Road, clearing the space to build a massive VIP hospitality pavilion, Berckmans Place.

In 2017 the club purchases a parcel of land behind the 13th tee from neighboring Augusta Country Club. (Terms are not disclosed.) In early 2019, it’s reported that Augusta also purchases the Publix shopping center on Washington Road for $21 million. How will all this new land be used? Only club members know for sure.

Those iconic green jackets suddenly start popping up in auction houses, which displeases the club. Some were “stolen,” some may be fake, and some are legit. The controversy lingers as jackets continue to appear in the wild.