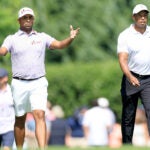 Anirban Lahiri played with Tiger Woods on Wednesday at the PGA Championship.

TULSA, Okla. — Anirban Lahiri was planning to tee off alone.

It had been a whirlwind just to get to this point. Lahiri, a 34-year-old Indian PGA Tour pro who wasn’t sure he’d play at all. His wife was due to give birth to a baby boy and he was committed to being there to ensure that everything went smoothly. He’d drawn a mental line: If his child hadn’t arrived by Tuesday morning, he’d officially withdraw from the PGA Championship. Otherwise? He’d see what he could do.

“We had a false alarm on Saturday where we thought she was going into labor,” Lahiri said. “And then Sunday was just — nothing. So I started to think maybe I wasn’t going to play this week. But Sunday night she started feeling it and Monday morning, next thing you know, here he is. Everything went as well as it could and I’m very grateful and thankful for that.”

Lahiri stuck around their home in south Florida for the rest of the day. His in-laws were there, too. By Tuesday he felt comfortable gearing up to hit the road. And then on Wednesday morning he walked onto the first tee at 9 a.m., ready for his very first look at Southern Hills.

Then Tiger Woods walked onto the tee, too.

A group had just gone off the first, so it made sense that the two singles would pair up. With Woods, of course, it isn’t that simple: He comes with a team in tow plus a small horde of media members and a larger horde of Oklahomans, already five deep around the tee by this point.

“It was totally random,” Lahiri said of the pairing. “He just walked on the tee and I’d just gotten there and he said, ‘Hey, can I join you?'”

Lahiri first met Woods in 2014, when he and fellow Indian golfer Shiv Kapur played a three-hole skins game at the end of an exhibition at Delhi Golf Club. The meeting left a strong impression, and not long after Lahiri won his first DP World Tour event at the Malaysian Open, won the Hero Indian Open shortly thereafter and leapt inside the top 50 in the world.

He has played the PGA Tour since 2015 but said he and Woods have never played together since their meeting in Delhi. If Lahiri was nervous, he didn’t show it. He and Woods shared a laugh, he teed up driver and ripped one down the first fairway.

Over the next two-and-a-half hours Woods and Lahiri played Southern Hills’ front nine. They walked down several fairways side by side, chatting and laughing. They talked about shared memories. They mused on the finer points of the golf course. The crowd swelled. Soon, thousands lined the ropes. Inside, they looked every bit like old friends.

“We had a bunch of laughs,” Lahiri said. “I was ribbing him about his age and his health. And we were talking about Arjun [Atwal], who’s one of his good friends. Tiger has always been super nice to me.”

Lahiri enters this week’s event in strong form. He finished runner-up at the Players Championship in March, the best finish of his PGA Tour career. That result kicked off four top-15s in his next five starts, including a T6 at the Wells Fargo Championship two weeks ago. After falling to nearly 500th in the world in 2021, Lahiri is back inside the top 75.

Good news had traveled fast about Lahiri’s son; Woods offered his congratulations and followed with plenty of questions.

“Since I just became a dad, we were swapping dad knowledge,” he said. “He’s the same as me, actually, he has an older daughter and a younger son.” Lahiri’s daughter is three years old.

As for the practice itself? Lahiri said the extra thousands didn’t inhibit his prep. If anything, they enhanced his focus.

“To be honest with you it was a lot smoother than I thought it might be with the crowds and everything,” he said.

Woods peeled off after nine holes, leaving Lahiri with a new high-profile partner on the back side: Bryson DeChambeau. The crowd dispersed, but intrigue followed — DeChambeau was himself pondering whether he’d be able to play the event. (He’d later withdraw.)

Lahiri’s heart is in Florida. But he’s hoping his golf game made the trip to Tulsa.

“I would like to be there as well right now, but [my wife is] recovering well and we have a good support system there and she wanted me to play, too,” he said.

As for their son? His name is Avyaan. “It means ‘auspicious beginning,'” Lahiri said.

Avyaan has already had one.