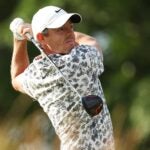 The 2022 U.S. Open continues Friday, June 17, with the second round at The Country Club. You can see complete Round 2 U.S. Open tee times for Friday at the bottom of this post.

Featured grouping for U.S. Open Round 2

Rory McIlroy was the pre-tournament betting favorite at this year’s U.S. Open, but once the first balls were hit Thursday morning, none of that mattered anymore. But it turns out the oddsmakers were on to something.

The four-time major champion, who won the 2011 U.S. Open at Congressional for his first major title, started on the back nine Thursday morning at Brookline. He was steady early, making par on the first six holes before dropping his first birdie at the par-3 16th to reach red numbers.

He followed that up quickly with another birdie at 18 to make the turn at two under, and he was off and running.

For the second round, McIlroy and playing partners Hideki Matsuyama and Xander Schauffele will tee off in the afternoon at 1:25 p.m. ET. You can watch Friday’s second round on USA and NBC on TV, or stream the action live online via Peacock and USOpen.com. Click through to see our full U.S. Open TV and streaming schedules.

SIGN UP FOR PEACOCK PREMIUM TO WATCH EXCLUSIVE COVERAGE OF THE 2022 U.S. OPEN

Browse the complete second-round tee times for the 2022 U.S. Open below.

How to bet on the U.S. Open