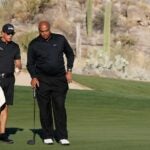 Phil Mickelson and Charles Barkley were victorious in an upset of Peyton Manning and Stephen Curry during The Match III.

Check in every week for the unfiltered opinions of our writers and editors as they break down the hottest topics in the sport, and join the conversation by tweeting us @golf_com. This week, we discuss the deal between the PGA and European Tours, the best formula for The Match, the best state for golf,  and more.

1. The PGA and European tours announced on Friday the beginning of a strategic alliance, one that will see the two leagues collaborate on commercial opportunities and global media rights in certain regions. It will also mean more collaboration on global scheduling, prize money and playing privileges for both tours’ memberships. Look into your crystal ball: What’s the best endgame scenario in this partnership?

Sean Zak, senior editor (@sean_zak): The best endgame scenario is one elite tour that spans the globe, spends a lot of time in America in Jan. through May, then Europe from June through July, America again from August through October and then Australia and Asia in November and December. Is this fantasy? Perhaps. But you could mesh much of the non-elite Euro Tour events with the Challenge Tour and really force the cream to rise to the top without sacrificing a lot of opportunity.

Alan Shipnuck, senior writer (@AlanShipnuck): Yes, in an era of too many tournaments and not enough stars it has always made sense to collaborate on an integrated global schedule which will bring the best players together more often and hopefully at interesting, varied venues. I like what Zak has laid out and hope J. Monahan is listening.

Josh Sens, senior writer (@JoshSens): Well said above. We should also hope that the events themselves ultimately take on their own compelling identities and don’t just have the feel of just-add-water-and-a-ton-of-money to them. There’s already plenty of that in the game.

Nick Piastowski, senior editor (@nickpia): Agreed. A global tour seems very likely. Of course, players have often talked about enjoying their “independent contractor” status, where they, to a degree, have the ability to pick and choose which tournaments they want to play. This becomes a lot more difficult when the next six tournaments are halfway across the globe. I imagine someone much smarter than me is figuring this out as we speak. (On a side note, one scenario that could be fun would be some sort of multiple-country, NCAA-tournament-style, end-of-year tournament. Maybe even match play!) 2. European Tour commissioner Keith Pelley said his tour chose the deal over a counter-offer from the private equity firm behind the proposed Premier Golf League. What do you suppose this means for the prospects of the PGL?

Zak: They certainly took a hit. The PGA Tour empire grows wider and stronger, and with Euro TV rights under its umbrella of control, where else can the PGL create an advantage?

Shipnuck: Conspiracy theory: the PGL was was a shell corporation created by player agents to give the top players leverage to drive up purses and appearance fees. I think it’s working! The PGL was always a pipe dream but just the whiff of it has reshaped the golf landscape for the better.

Sens: My guess is that the PGL just got closed out, 7-and-6.

Piastowski: Alan going full CSI: Professional Golf, I see. Haha. On the surface, the PGL appears dead. But maybe that just makes them literally raise the stakes. A $10 million purse, for example, could turn into $25 million. Who knows how deep the pockets are. I’m not ruling out a potential golf arms race.

3. The Match III is in the books. Charles Barkley and Phil Mickelson defeated Steph Curry and Peyton Manning 4 and 3. There was some golf. There were some laughs. Charity was also a big winner, with Historically Black Colleges and Universities the beneficiaries. We’ve now seen three iterations of this high-wattage exhibition: one only with golfers (Tiger vs. Phil), one with two golfers (Tiger and Phil) and two celebs (Manning and Tom Brady) and one with one golfer (Phil) and three celebs. Which formula works best, and why?

Zak: The Match II had the best format. At times, it’s great to see celebs struggle, but not for four or five hours. Get on with it! With two elite pros involved, there’s plenty of teaching, the match feels as level as can be, and you can actually see great shots be responded with … other great shots.

Shipnuck: I like the Match II format as long as Tiger isn’t involved — he’s too stiff, serious and brooding for these things.

Sens: Match III gets my vote. But that was because of the personalities, not their status as golfers. Of course, we don’t want to watch entirely awful golf by everyone involved. But one pro, two pros. I don’t think it matters as long as the other players can get it airborne and have something entertaining to say.

Piastowski: Any Match needs both Sir Charles and Phil in it, either announcing, coaching or playing. Or all three at once. They’re two of this generation’s — maybe any generation’s — best sports entertainers. They’ve made these things pretty damn fun to watch.

4. No doubt 2021 will bring a Match IV. Let’s assume Mickelson will again be part of the proceedings. Who should join him? And would you suggest any format tweaks?

Zak: Get Justin Thomas involved again. He provides good smack. And he’ll get a great rise out of Mickelson. JT and JT (Timberlake) against Phil and Mark Wahlberg, another high-wattage lefty and golf sicko.

Shipnuck: Phil is clearly must-see TV. Keep him, bring in JT or Rory or Bryson or Terrell Hatton or Brooks or Tommy Lad or Westy or Big Easy, mix in a couple of fresh celebs and I think it’s a winning format. But 18 holes is waaaaay toooo long. How about a 12-hole match? Or 14?

Sens: Rory. Daly. Nelly Korda? Christina Kim? Make it a mixed-doubles event. And add some skills challenges, including skills challenges from other sports. As for Hollywood … aside from Bill Murray, I’m struggling to think of someone from that world I’d want to watch play golf for very long. Wait. What was I thinking? Larry David. He’s got to be involved at some point.

Piastowski: I’d love to see MJ. I was hoping he’d be in this one. I’d love to see a top male pro with a female celebrity, and vice versa. I’d also like to see some guarantee that the players’ money was on the line.

5. Later this week we’ll release our rankings of the best courses in all 50 states, as decided by GOLF’s expert panelists. When you consider both public and private offerings, which state do you believe has the deepest lineup of courses?

Zak: It’s definitely California. You can’t fight the depth. But I’d like to quietly remind the world of Wisconsin’s incredible public golf offerings. Get involved folks!

Shipnuck: Cali for sure, but New York is a pretty solid second.

Sens: If we’re going strictly by numbers, then yeah, California. But when we throw in other factors like price and great courses per capita, Michigan and Ohio both belong high up there. Too bad about those winters …

Piastowski: I haven’t played in all that many states, so I’ll let the experts expertly handle it. But this is as good of time as any to plug the depth and value of public courses in Milwaukee, my hometown, and Omaha, Neb., my second home. Each offers courses where you can play 18 with a cart, a hot dog and two beers for just about 50 bucks. Can’t beat that.

6. Rickie Fowler, on this week’s Subpar, dished on Michael Jordan’s new course, The Grove XXIII, and said that MJ has set it up for his game — and perhaps to counter pros’ games. “The shorter you hit it, the wider it is,” Fowler said. “So the tees and pins are done every day, so the golf course can play as long as you want, but they set the back tees at roughly 7,000 or 7,100 yards, and MJ just plays the back tees. It’s a golf course where he can basically hit driver on all of the par-4s and par-5s, and if I wanna hit driver, I have to kind of put it into a little bit tighter of a spot. I can obviously play back if I want, but that obviously becomes a little bit of a disadvantage, especially if it’s a hole where he’s getting a stroke on.” Put on your design cap. How would you build a course to give your own game a distinct advantage?

Shipnuck: Snack shack every three holes. I eat more food on the course than any golfer I know.

Piastowski: No trees, no water, no sand, no grass, just one giant hole. And I’d still wouldn’t crack 80. Haha. First, I’d need all 18 to shape to my fade. Then, we’d need some sweet scenery. And, finally, a bar and grill that specializes in grilled sausages and burgers, craft beer and craft cocktails. Come for 18, stay the day.