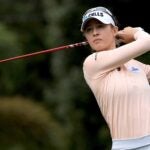 Nelly Korda picked up her fourth LPGA Tour win of the season on Sunday.

Entering Sunday, Phil Mickelson was contending on the PGA Tour Champions, while a long-shot struggling pro was in the mix on the PGA Tour. But the best Sunday stage, the one with the most intriguing storyline, had to be on the LPGA Tour.

Everyone is entitled to their opinion, of course, but let’s break down the case for the Pelican Women’s Championship.

— Nelly Korda and Lexi Thompson were tied for the 54-hole lead (16 under).

— Thompson is arguably the women’s game’s most popular player and is still just 26 years old.

— Korda, at just 23, is the world’s top-ranked player and, soon, might eclipse Thompson as the game’s most popular figure. Some would argue she has already. They made up the star-studded final pairing at Pelican Golf Club in Belleair, Fla., on Sunday — the first time the mega-talents had been paired together on a final day.

— And then in third place, just one off the lead (15 under), was 24-year-old Jennifer Kupcho, another American with a bright future and the winner of the inaugural Augusta National Women’s Amateur back in 2019.

— And then there were the chasers. The leaderboard featured four Americans in the top five (the other was Christina Kim), and Sei Young Kim, the No. 4 player in the world, was tied for fourth. Patty Tavatanakit, who won a major in April, and Lydia Ko, a 16-time LPGA Tour winner, were three back and tied for sixth. And lastly, it would be irresponsible not to mention Jin Young Ko. The world No. 2 started Sunday seven back, but who would count out the winner of the last two LPGA events, and someone who has four times in her last seven starts?

“It’ll be a good final day,” Thompson said on Saturday. “Looking forward to it. Hopefully we just make a lot of birdies out there.”

In a battle that saw a ton of early birdies, late pars and really late blowups, we needed bonus golf — with three of the top-five players in the world — to decide the winner.

Korda emerged from a four-person playoff to win, making birdie on the first playoff hole, the par-4 18th. It was a wild final hour, as Korda and Thompson were tied late, stumbled and found themselves in extra holes. Korda, for example, went 7-3-3 on her last three holes (triple, birdie, birdie) to close the tournament.

“It was a heated battle,” Korda said. “I actually really enjoyed it. It was a lot of fun. We were still kind of smiling and joking together and talking, so it was nice. But she definitely kept me on my toes, and I guess did I as well with her. She played some solid golf.”

Fun? Yes. Unexpected? You bet. About the only thing missing was live TV coverage (it was available via live stream and will replay on Golf Channel at 7:30-10:30 p.m. ET Sunday night).

So, where to begin?

In the final event before next week’s season-ending CME Group Tour Championship, Korda took a one-stroke lead at the turn with a three-under front nine, as Thompson turned in two under. (The final duo was so hot it combined for a six-under best ball on the front nine.) Korda went up by two with a birdie on 10, but the par-3 12th turned out to be a swing hole. Korda bogeyed and Thompson birdied, making it a two-way tie at 19 under, which was three clear of the field.

Ahead of them, Ko signed for a four-under 66 and posted the clubhouse lead at 17 under (which Sei Young Kim eventually matched), but it was unlikely that would stand. Then came the 17th hole.

Thompson three-putted the par-4 from 25 feet and made bogey, but that actually gave her the advantage. Korda made a triple-bogey 7 and dropped to fourth place. She missed the fairway left, found the green-side bunker and eventually missed a two-footer for double bogey. What for 16 holes was a back-and-forth battle between two of the game’s top American players was unpredictably blown up on a short 336-yard par-4.

Thompson’s bogey dropped her to 18 under, but a par on 18 would have still been good enough for a victory. Korda needed to birdie the 18th to tie the clubhouse lead and then hope Thompson made bogey or worse.

“It was like, Okay, I need to get off this hole,” Korda said, referring to her mindset after her triple bogey on 17. “I told [my caddie] Jason [McDede], ‘Thank God we’re not playing 17 in the playoff.’ I just tried to shake it off. I was pretty upset. There was definitely some R-rated words going through my head and probably out of my mouth. Nice thing about Jason is I can kind of vent to him and he takes it. It’s not directed at him. It’s just I can vent and get it all out, and then I can focus. He tells me positive thoughts now that everything is out in the air, and go after it.”

So, of course, Korda made birdie on 18, getting to 17 under, and Thompson was faced with a four-footer for par to win, otherwise it would be a four-way playoff. She missed, and Korda, Thompson, Ko and Sei Young Kim headed back to the 18th tee. Only Korda and Thompson found the green in regulation, and after Korda rolled in her birdie putt, Thompson had about six feet for her try. She couldn’t convert, and Korda, despite a triple-bogey on 17, walked away a winner.

“I knew what [the putt] was doing, moving a little left to right,” Korda said. “I gave myself a lot of opportunities this week. My putting probably wasn’t the best, but pulled it off with it, so that’s what counts.”

It’s the fourth win of the season for Korda (not to mention her Olympic gold medal), which ties Jin Young Ko’s four victories. It’s also the most wins by an American since Stacy Lewis won four times in 2012.