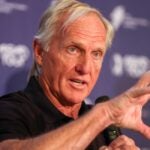 Greg Norman was in the public eye this week giving interviews about LIV Golf's latest developments.

Check in every week for the unfiltered opinions of our writers and editors as they break down the hottest topics in the sport, and join the conversation by tweeting us @golf_com. This week, we break down the latest developments with LIV Golf’s breakaway league, Henrik Stenson’s Ryder Cup captaincy and the sweetest swing in golf.

1. The Saudi-funded golf league in-the-making, which will go by the name LIV Golf International Series, revealed more of its plans this week. Kicking off in June, the tour will play eight events, including four in the U.S., and pay out $255 million in purse money. While no players were announced, among other details are the incorporation of team play, a weekly draft, shotgun starts, 54-hole events and no cuts. What, if anything, most surprised you about the announcement?

Dylan Dethier, senior writer (@dylan_dethier): Besides the Pacific Northwest getting involved? I’m not sure there were any wild revelations except that Tour pros are about to have to make some intriguing decisions. It’s about to get real. Finally. I think.

James Colgan, assistant editor (@jamescolgan26): It surprised me that I’d thought about this potential league for dozens of hours over the last 12 months without realizing that “LIV” stood for the Roman numeral for “54” — or the number of holes in each event on the schedule.

Michael Bamberger, senior writer: The unabashed confidence of it. The LIV people have been dealt some body blows. They seem unfazed.

Alan Bastable, executive editor (@alan_bastable): I was a bit surprised by how fleshed out the schedule was and quite surprised that half the events are Stateside. (Also Norman claiming that he received a positive response from top-10 ranked players is totally at odds with what we’ve heard — thus far — from said top-10 players.) I’m also keen to learn more about how that site recruitment process worked. Presumably, LIV approached dozens of clubs before landing on the four that committed. Curious how LIV identified their short list. If there’s any detectable trend, they smartly seemed to veer away from towns with established Tour stops.

2. Greg Norman, the league’s commissioner, said he emailed 250 players on Tuesday, and received this response: “…The amount of response [has been] unbelievably positive. I’m talking about single-digit ranked players in the world, emailing me first thing this morning, just so excited to hear about what we have to say and what we’ve got.” This comes on the heels of multiple star players pledging to the PGA Tour following controversial comments on the tour from Phil Mickelson, and the PGA Tour threatening to ban players who would play in the startup league. Do you believe that active PGA Tour players will come around?

Dethier: Yes, I believe some active PGA Tour pros will jump ship. There’s too much money for them not to. I also think we can probably take “unbelievably positive” with a grain of salt, considering the source. There’s nothing simple about this issue nor the murky morality of it all and the only certainty is that this will continue to be a thorny, evolving situation that will force Tour pros to continually take a side. It’s not as simple as choosing the PGA Tour and staying there, because Norman is leaving the door open, and open, and open.

Colgan: Do I believe that Tour players will sign up for a league in which the *minimum* tournament payout is $5 million more than the largest purse in PGA Tour history? Yes, yes I do believe that.

Bastable: Not just money, life-changing money! If you parse press-conference comments and tweets from the last three months, I think you could safely identify a handful of players who seemed primed to be teeing up at Pumpkin Ridge in July. Also, look for a strong turnout from the Euro contingent. I would guess LIV’s top priority is getting 12 notables who can serve as team captains. The remaining 36 players are less crucial in terms of Q-rating. The Saudis are playing the long game here; they can afford to be patient, in more ways than one.

3. What caliber of players need to participate for this to be a viable television or streaming enterprise?

Dethier: That depends. In some ways I’d prefer we randomly select 48 golfers from your local muni and have them play for $25 million rather than selecting a group of middling professionals from in-between stages in their careers. But the question of TV rights is among the most fascinating to come out of this. Will a broadcast partner step up?

Colgan: I have always believed the ONLY way in which a rival tour could gain a foothold is if it signed a critical mass of young, ascending talent (your Will Zalatorises, Matthew Wolffs and Joaquin Niemanns). Sure, landing half of the World Top 10 would help, too, but it feels more reasonable to believe the youngsters would jump ship than a bunch of dudes who are on-track to be hundred-millionaires through the current PGA Tour system.

Bamberger: You need name players, and young talent. I could see elite amateurs from all over the world making the LIV Tour their first stop.

Bastable: I’m not convinced Nielsen ratings are a top priority for LIV at this juncture — getting the league up and running is. Sure, Norman and Co. want to get eyeballs on their tournaments as part of the wider effort to rehabilitate Saudi Arabia’s public image, but job 1, I’d guess, is executing a beta season and showing players that this thing can work. Baby steps, building blocks, etc.

4. Henrik Stenson, after talk that he would play in the Saudi-funded golf league, was named this week as the European Ryder Cup captain, and he’ll square off against U.S. captain Zach Johnson at next year’s event. Surprised the Swede got the nod?

Dethier: Only surprised because it seems to mean he’s not going to be a part of the LIV breakaway league. Stenson’s name was floated as a potential participant and he implied in his captain’s press conference that by assuming the captaincy, his allegiance is to the DP World Tour and, by association, the PGA Tour. He’ll be a terrific presence at the podium; golf reporters may be the real winners here.

Colgan: Perhaps the PGA Tour/PGA of America has more bargaining power than we thought! That was my only surprise.

Bamberger: Yes. Henrik will be great, but I thought Luke Donald was going to get it. Never bet on my predictions.

Bastable: For the longest time, it looked like Westy’s job, and it would’ve been if he wasn’t still so good at…um, golf. Late last year, Westwood pulled the plug on a potential appointment when he learned how much of his practice/competing time it would eat into. Stenson will be a memorable captain. He’s a king in the press room, and his icy glare on the 1st tee will have American rookies shaking in their soft spikes.

5. Golf’s governing bodies released another update to its distance report, though nothing was finalized. According to a release, the USGA and the R&A will: 1) increase “the ball test speeds for golf balls to reflect the clubhead speeds achieved by today’s longest hitters;” 2) “narrow the focus of previously announced research topics for drivers, specifically within the context of potential Model Local Rules, to explore a reduction of spring-like effect;” and 3) make “industry stakeholders aware that they are considering whether these potential changes could be coupled with other changes to the Equipment Rules that could provide the potential for enhanced innovation for recreational golfers.” What’s the headline in this latest distance update from the powers-that-be?

Dethier: The headline is that we still haven’t gotten past “research topics” to actual action. Golf fans are inundated with news from all corners — it’s unlikely any update to this report will break through until there are actual concrete changes that come with it.

Bamberger: More of the same. Everyone is afraid of shaking up the status quo. Which I think is a shame. A 7,000-yard course for elite players is better than a 7,500-yard course.

Colgan: I’m not sure there is a headline. Goodness, can we get an answer already?

Bastable: Alas, James, no, we cannot — and we’re unlikely to for years. It’s clear any significant action still isn’t close. Of the handful of “areas of interest” the governing bodies are pondering, though, the proposed modifications to ball testing remain the most intriguing, including a 5 mph increase in the swing speed (from 120 mph to at least 125 mph) at which they’d test conformance. If that happens, the ballmakers will most certainly be busy redesigning orbs for elite players, if they’re not already.

6. Our Luke Kerr-Dineen released the golf swing March Madness bracket, in which readers can pick among 64 players in an attempt to find golf’s sweetest swinger. Who has your vote?

Bamberger: I’m right there with you, Dylan. But Payne Stewart, RIP, had one of the prettiest swings ever, too.

Colgan: I would trade my 401(k) for Adam Scott’s golf swing.

Bastable: Could happily while away a spring afternoon watching Freddie smooth 7-irons on the back of the range. But for a more underrated pick, I’ll go with Tiger, v. ’97.