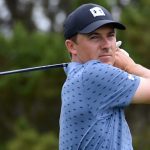 Jordan Spieth picked up his 12th career PGA Tour victory on Sunday, and it came right before the Masters.

Check in every week for the unfiltered opinions of our writers and editors as they break down the hottest topics in the sport, and join the conversation by tweeting us @golf_com. This week, we discuss Jordan Spieth’s slump-busting victory, the big week that was in women’s golf, preview the Masters and more.

1. Jordan Spieth, the 2015 Masters champ, has rekindled his game over the past few months and on Sunday won the Valero Texas Open for his first victory since the 2017 Open Championship. What’s been your biggest takeaway of Spieth’s struggle and, now, resurgence?

Michael Bamberger, senior writer: What impressed me most was that he never asked for sympathy, and he never seemed to pity himself. He also looked like he had faith, that he would find his way through it.

Josh Sens, senior writer (@JoshSens): I was struck by his resilience but also by his optimism. Even in the lowest moments, there was never a sense of self-pity or quit. He was always grinding. Never any indication that he’d lost belief in himself. He genuinely seemed to know that he would get it back, even if he didn’t know when.

Nick Piastowski, senior editor (@nickpia): On top of those answers, I’m wondering what’s next. In the immediate future, play like this tends to last a while, so I think we’ll see Spieth around the top of leaderboards all summer. But what if all these trials and tribulations created an even bigger and better Spieth? I’m very interested.

Sean Zak, senior editor (@sean_zak): I really, really liked the 2017 version of Spieth. Capable of going off any week. Capable of losing a lead. Endlessly entertaining. This feels like that again. You can’t look away.

Dylan Dethier, senior writer (@dylan_dethier) After he won, he seemed most excited about the idea of thanking the people who had helped him get back to this point. That’s pretty cool.

2. Spieth’s win came at an opportune time. An April Masters, for the first time since Tiger Woods’ 2019 triumph, is back. The 85th Masters returns to its usual springtime date after last year’s November edition and will be held this week at Augusta National. Spieth still hasn’t missed a cut in his seven Masters appearances and has finished outside of the top 11 just twice (the last two years). Meanwhile, defending champ and current World No. 1 Dustin Johnson was T11 and T8 in his two starts since winning the green jacket, but he hasn’t been as sharp in his last three (T54, T48 and failed to advance out of pool play at the WGC Match Play). Who has a higher finish this week, and why?

Bamberger: I like Spieth. He always shows up there (pretty much), and he has shown up at almost every tournament.

Sens: Spieth. But that’s because I think Spieth will win. DJ will be right in it. Place no stock in his recent struggles, which are only really struggles by DJ standards. He can switch it on faster than anyone in the game. He’ll be in the mix over the weekend.

Piastowski: DJ. Back-to-back is a lot to ask, especially after the emotion of winning for the first time in nearly four years.

Zak: If I needed one round in the 60s from anyone in the world, I’m going with DJ. If I needed some magic during a final round at Augusta, I’m going with Spieth. Feels wrong to pick against the Golden Child right now. Yes, that was a non-answer. Sorry!

Dethier: DJ. Remember what he did in November? I’ll try to resist being prisoner of the moment here. But I wouldn’t mind being wrong.

3. What’s the most underrated Masters storyline that fans need to be aware of?

Sens: With Spieth resurgent and DJ defending, the Bryson-shrinks-Augusta story isn’t getting near the attention it received in the run-up to the tournament last year. A strong Thursday and Friday should bring that narrative right back to the top of the weekend headlines.

Bamberger: That Tiger will not be there.

Piastowski: I’ll stick to the underrated part of the question — though I really want to answer that I’m interested to see how Brooks tackles Augusta National on one leg. How about Daniel Berger, who played fantastic golf last summer, only to have to miss the November Masters after the field stayed the way it would have been had the tournament been played in April.

Dethier: It’s only underrated for about 12 more hours, and then it’ll quickly become overrated, but: Augusta is playing firm and fast. It’s going to be a radically different test than November.

4. Johnson shot a course-record 20-under 268 last year to win by five. Sure, it was a different season, but it was still a head-turning performance on Augusta’s storied grounds. How do you think last year’s scoring affects this year’s setup?

Sens: I don’t see it affecting at all. Last fall, the green jackets switched up some of what had become the traditional Sunday pins. This week, I expect them to go right back to setting things up as they have since as long as many of us can remember.

Bamberger: I completely agree with Josh. This will be business as usual. Looks like the course will play firm and fast. Totally different from November.

Zak: Business as usual sounds like firm and fast right now. At least that’s what Bryson DeChambeau told us Sunday night. The ball is gonna roll, roll, roll out there and we’re here for it.

Dethier: Whoops, looks like my last answer jumped the gun here. I think they’ve been particularly focused on firming things up this spring. I’m always hesitant to predict high scores — these guys are too good! — but I’d be shocked if they get near 20 under.

5. Japan’s Tsubasa Kajitani won the Augusta National Women’s Amateur on Saturday after its one-year hiatus, and Patty Tavatanakit won the first major of the season, the ANA Inspiration, on Sunday. What moment (or whose play) from what was a big week for women’s golf most resonated with you?

Sens: Our own James Colgan captured it well in his game story — all the riveting commotion on the back nine. Augusta rarely fails to serve it up. Doesn’t matter whether it’s men or women. You never know whether a player is headed for glory or catastrophe.

Bamberger: The Butler Cabin interview in all of its wonderful awkwardness. It just showed how completely international the game is and look where golf took this young woman in her not even 18 years.

Piastowski: Lydia Ko at the ANA. Is it the best round in a major ever?

Zak: I loved seeing the battle at Augusta. Six tied for the lead on the back nine? Nerves all around. Kupcho and Fassi played a compelling match in 2019, but seeing the full leaderboard was a treat. It felt like a Masters finish.

6. Augusta National will allow limited fans on site this week, but let’s help the viewers watching through their TV screens. Based on your experiences on site, what’s one thing about the course they should pay special attention to while watching from home?

Sens: The course is just so much flatter than you see on TV. I joke. What always strikes me is the scale of the property. You feel almost dwarfed by it. But then a roar goes up and everything becomes intensely intimate, as if the action is happening just a breath away from you, no matter where you are.

Bamberger: How tight the lies are on some of those greenside pitch shots and chip shots. Some of those shots are almost impossible for the ordinary golfer.

Piastowski: I haven’t been yet, so I’ll rely on my colleagues’ stories. You can’t mimic the thunder of the cheers — no matter how loud you turn up the TV volume.

Zak: The bad tee shots on 5, 7, 17. No water, plenty of double bogeys. These holes don’t seem so brutal, right up until the moment they are. Don’t sleep on them while waiting for the exciting holes.

Dethier: There’s a moment at about 5 p.m. every day where the wind seems to die, the shadows get longer and the game gets simpler. That’s the time you want to be out there playing. Walking and watching, too.