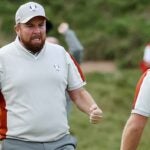 Shane Lowry had a 1-2-0 record in his first Ryder Cup.

Despite the fact that he was on the losing team, Europe’s Shane Lowry won plenty of hearts at the 2021 Ryder Cup when he made a clutch 11-footer on the 18th hole on Saturday afternoon to tie the hole and win his fourball match against Tony Finau and Harris English.

When Lowry drained the putt, it was a rare cause for celebration for Team Europe, who trailed the Americans 11-5 heading into Sunday singles. Images of Lowry celebrating, with his father, arms raised, behind him, went viral.

“I’ve always wanted to play in a Ryder Cup. We are a few points behind, but I mean, I’m not stopping believing. I don’t care,” Lowry said in the aftermath. “I think I’m having the week of my life here, honestly, I really am. It’s just been incredible.”

Unfortunately, after Europe ultimately suffered a 19-9 defeat, Lowry’s perspective on the experience apparently darkened. In an Instagram Live appearance with Paddy Power (a restricted profile in the U.S.), Lowry vented about the gamesmanship employed by several members of the U.S. team — especially Sunday singles opponent Patrick Cantlay, who defeated Lowry 4&2.

“Yeah, [Cantlay] pissed me off a little bit on the 8th, to be honest,” Lowry said. “I was lining up my putt and he was riling up the crowd which I didn’t think was great. In Rome, we’ll hopefully win and win in a different style, that’s how I’m looking at it.”

Lowry’s frustrations didn’t end with Cantlay’s cheerleading. Tension over unconceded putts became a major theme of this year’s Ryder Cup, with U.S. players like Bryson DeChambeau and Justin Thomas visibly measuring their putts with their putter shafts to demonstrate that the length they were being made to putt was “inside the leather” — that is, a length that is widely viewed as being deserving of a concession.

Lowry also said that the charged atmosphere made him less inclined to concede putts.

“I wasn’t giving them anything last week because I was getting booed,” he said. “I was playing with Tyrrell Hatton on Saturday afternoon and he wanted to give them a couple of balls and I said, ‘No, let’s just let them see the ball in.’ It was a bit of gamesmanship from me as well. I was just trying to annoy them and get in their heads as well but it obviously didn’t work.”

Lowry ended his first Ryder Cup with a 1-2-0 record. The next Ryder Cup will be played at the Marco Simone Golf & Country Club near Rome, Italy, in 2023.

Shop our selection of USA-themed gear