Tour Confidential: Who’s in the best position to make a Masters move? 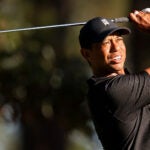 Four players share the lead at nine under at the darkness-suspended Masters. Four players are a stroke behind, five are two behind, and another five are three behind. Or, in another way of saying it, everyone is low and everyone is in contention after Friday. Which player is in the best position to make a move up the leaderboard on moving day at the Masters?

Sean Zak, senior editor (@sean_zak): Jon Rahm is the man. He’s very quietly and steadily moved up to just one back. He’s got a short birdie putt on 13 and that very gettable 15th ahead of him. It’s very reasonable that he’ll have the final tee time Saturday afternoon.

Josh Sens, senior writer (@JoshSens): Sean’s right about Rahm, no doubt. I’d be shocked if he’s not leading going into the third round. But I’m sticking with my pre-tourney pick of DJ to make noise on Saturday afternoon. Come Sunday, he’ll be playing in the final pairing in a major yet again.

Alan Shipnuck, senior writer (@alanshipnuck): I agree Rahm looks very dangerous. But Dustin has hardly used up all of his bullets. He burned a lot of edges today – I think the putts will fall tomorrow, and he’ll shoot something in the mid-60s.

Michael Bamberger, senior writer: I like Ancer. So cool.

James Colgan, assistant editor (@jamescolgan26): No love for JT here? Color me surprised. He’s played FAR from his best golf over these first two days, and yet he’s still tied for the lead heading into the weekend. If not for a ricochet off a tree on 1, Justin would be comfortably in the lead right now.

Dylan Dethier, senior writer (@dylan_dethier): Tiger Woods! He’s the defending champ, he’s five shots back, and he’s about to take on the golf course’s most scorable section. If Woods can finish off the 11th hole on Saturday morning, he has a chance to make a run through those remaining holes. The biggest question mark is whether he can get his body to cooperate that early in the morning. …

Jessica Marksbury, multimedia editor (@Jess_Marksbury): I agree with you, Dylan. Tiger should easily get to within three on his final eight holes on Saturday — at the very least! Then he can head into the third round already warmed up and ride that positive momentum right up the leaderboard in the afternoon.

Nick Piastowski, senior editor (@nickpia): Any of the leaders who finished Round 2 on Friday. For those who didn’t, it’s going to be a grind to get up early, play a few holes, possibly wait an hour or two, then play again. Hard to keep momentum going that way. That being said, I picked Hideki Matsuyama before the tournament, and I’m going to plug him in this space, too. One bogey so far. That’s good!