The 5 most shocking players who qualified for the Tour Championship 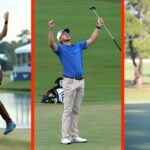 Who overcame the longest odds to make the Tour Championship field?

No golf fan will be surprised to see Dustin Johnson, Jon Rahm or Rory McIlroy in this week’s Tour Championship field. Nor will the names of Justin Thomas, Webb Simpson and Bryson DeChambeau raise any eyebrows. But the PGA Tour has now whittled down its stars of the season to just a top 30, which means it’s time to get rid of our preconceived notions of golf’s best male players and see who has actually earned the right to be here.

There are major goodies associated with a top-30 finish, too: In addition to FedEx Cup winnings (which are significant), all 30 players at East Lake will qualify for the 2020 U.S. Open, the 2020 WGC-HSBC Champions, the 2021 Tournament of Champions (whether they won or not) and all four major championships in 2021. To some of these guys, that’s a major promotion.

Some golfers in the field were on the Korn Ferry Tour last season, while other names on the list might be wholly unfamiliar to a casual fan. Here are the five players in this week’s field who seemed least likely to get there.

Brendon Todd emerged as the unlikely hero of golf’s fall season when he emerged from the depths of the yips to win back-to-back titles, and he’s actually now garnered enough attention to disqualify himself from this list. But because Todd worked his way onto everyone’s radar, a couple other golfers who got off to hot starts slipped through the cracks.

Enter Lanto Griffin. A year ago, Griffin was playing in the Korn Ferry Tour Finals and grinding to regain PGA Tour status. Once he got a taste of the big Tour, there was no turning back. Griffin, ranked outside the world top 200 at that point, finished 13th in his first start of the season at the Greenbrier, kicking off a run of four consecutive top 20s before he took the biggest step of all in a career-changing victory at the Houston Open.

It’s hard for any Tour pro to match that start to the season — six consecutive top-20s, including a win — so it’s understandable that Griffin came back down to earth in 2020. Still, he added three top 10s in the new year, including a T10 finish at this week’s BMW Championship to remind golf fans that yes, he’s still very much here.

A year ago, Cameron Smith was dejected in wrapping up his 2018-19 season. The promising Aussie had so much success so early that a rough patch left him searching for a consistent 2019-20 season.

Well, he didn’t necessarily get that sort of consistency — but he got just enough to punch his ticket to the Tour Championship. What makes Smith’s trip to East Lake feel so unlikely is that he recorded just two top-10 finishes this season: A win at the Sony Open and a T3 at the CJ Cup last fall. Talk about making ‘em count!

“I’ve always been quite good at not giving up,” Smith said after his win. That’s a good quality to have in his line of work.

Smith, 27, is one of six members of the International Team from last year’s Presidents Cup to crack the top 30. That’s just one fewer than the American team, which saw seven of its 12 members make the field at East Lake.

Speaking of the Presidents Cup team, one player who wasn’t even seriously considered for that team was Sebastian Munoz, the 27-year-old Colombian who made his hay in the fall. After playing a mixed Korn Ferry/PGA Tour schedule in 2018-19, Munoz seized his earliest opportunities in the fresh season. He finished T7 at the Greenbrier and then won the Sanderson Farms the following week, instantly catapulting to the top of the FedEx Cup standings. A solo 3rd at the RSM Classic closed out his calendar year in style.

Munoz had such a strong fall, in fact, that his work was basically done by the time 2020 rolled around. Before the playoffs, he notched just one top-15 finish in 16 starts but was comfortably through, anyway. When he finished T18 at TPC Boston, he punched his ticket to East Lake. And when he finished T8 this past weekend — his best result of 2020 — he even picked up a couple extra shots for the Tour Championship.

Munoz enters the Tour Championship 15th in the FedEx Cup standings. For a guy who has never made a cut in a major championship, that’s a pretty huge season.

Even casual golf fans have likely heard Scheffler’s name by now, but it’s worth hammering home just how good the PGA Tour rookie has been of late. When it comes to stars under 25, the trio of Morikawa, Hovland and Wolff usually get all the attention. That’s not the case anymore.

Although Morikawa has ascended to another level with a major championship win, Scheffler (No. 17 in the FedEx Cup) is ahead of Hovland (27) and Wolff (35) in the points list. (Sungjae Im and Joaquin Niemann, it should be noted, are each also in this age group and in the field at East Lake.)

In his last five starts, Scheffler has notched five top-25s, shot 59, posted a top 5 in a major and ascended to No. 36 in the world. That’s heady stuff for the 24-year-old, who was still on the Korn Ferry Tour a year ago this time.

What if I told you that a golfer who started the year with the following stat line somehow made the playoffs?

An inauspicious start, right? But the great thing about the PGA Tour is that one hot week can change everything. Eleven starts into the PGA Tour season, Mackenzie Hughes had missed nine cuts and generally shown zero signs of life. He arrived at the 2020 Honda Classic low on hope and low in the world rankings — he’d slipped outside the top 300.

Then he finished solo 2nd.

It took a while for Hughes to back that result up; the Honda was his last start before the Tour’s hiatus. But since the restart, he notched a T3 at the Travelers and a T6 at the Memorial, sending him skyrocketing up the points list. The soft-spoken Canadian is hardly a household name, but he arrived in the playoffs knowing he needed two top finishes to make it to East Lake. A T13 at the Northern Trust advanced his case, and 71 strong holes at Olympia Fields left him on the cusp of qualification this week, too.

Long story short, Hughes arrived at No. 18 needing a par; a bogey would leave him outside the top 30. After his approach shot found a greenside bunker, he knew just what he had to do.

“If this was just a Wednesday practice round, nine times out of 10 he’d get it up and in,” said NBC analyst Paul Azinger.

This was a Sunday tournament round, though, and one with major implications.

“Yeah, that was some of the most pressure I’ve felt in a long time,” Hughes said. A solid bunker shot left him with a slippery five-footer for par, and he rolled in the putt and punctuated it with a big-time fist-pump — the kind you rarely see in a T10 finish.

“You know, I’ve contended to win some tournaments this summer, and that kind of felt like the same kind of intensity on that putt,” he said after the round.

The Tour Championship kicks off Friday at East Lake.