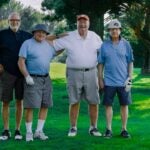 You probably know guys like "The Foursome's" main characters — or maybe you *are* them.

They are the golfers at the heart of The Foursome, a touching documentary short that looks at the game as a window into life.

Available for streaming next week on iTunes and Amazon, the 30-minute film follows the four friends, all well into their silver years, as they prepare to make their 50th consecutive appearance in the Waukon Men’s Invitational, an annual tournament at an Iowa course of the same name.

That, in part, is the point of The Foursome. That the allure of golf is not dependent on its trappings. Its draw resides in the ties that bind us. And the course is the forge where those bonds are built.

Fifty years golfing together in one tournament, in one little town. I guess there’s something to that.

In the case of Herb, Gary, Darrel and Bob, the golf connection dates to 1969, when they first teamed up to compete in the Waukon. They were already acquainted through overlapping circles, with Gary, Darrel and Bob working as local high school coaches, and Herb moonlighting as a referee.

At the outset, the four had no intention of turning their golf outing into a tradition. But “all of the sudden, it’s 10 years, 15, 20, 30,” Darrel says, his voice trailing off.

The swiftness of time’s passage is a central theme.

Though the Waukon tournament takes place in July, The Foursome captures small-town Iowa throughout the seasons: autumn foliage on the course gives way to winter snowfall; spring wildflowers are followed by summer rains. The soundtrack is country music, and the non-golf imagery is small-town Americana, of railroad crossings and Dairy Queens and the Stars and Stripes ruffling in the wind.

Along the way, the film spends time alone with each of its main subjects. Gary enjoys woodworking. Bob likes fishing. Darrel is something of an art collector. Herb is the writer and archivist of the bunch. What they share most intensely is an annual event.

While each man emerges as distinctive, they also stand as emblems, golf-loving Everymen whose comportment and rapport speaks to something broader about the game. Theirs is a friendship that can pick up where it left off even though they often cross paths only once a year.

The course they play is a low-key nine-holer, squeezed into a residential neighborhood, and the four men fit the unpretentious part, in bucket hats and cargo shorts and untucked shirts. As it captures them in action, The Foursome toggles between scenes of gentle humor and heartstring-tugging moments. In an early-on montage, PG-13 language is bleeped out as the men mutter expletives at their bad shots; most of the words are synonyms for “turd.” Try to find a golfer who can’t relate.

Herb, Gary, Darrel and Bob have been through things.

Heart attacks. Cancer. The loss of loved ones.

They laugh. They cry. Just not too much. Their eyes well up.

Their voices choke when they speak of their half-century of tournament play. But these are older men of Midwestern reserve. They convey their sentiments through understatement.

“Fifty years golfing together in one tournament, in one little town,” Darrel says. “I guess there’s something to that.”

The Foursome can be purchased on iTunes and Amazon starting Aug. 18. To watch a trailer, click here.