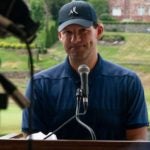 Tony Romo was forced to withdraw from the Korn Ferry Tour event with a wrist injury.

Michael Thompson was the story of the week on the big tour as he claimed his second career victory — seven years after his first — but there were some great stories playing out elsewhere in golf, too. Here are four stories you might’ve missed.

PGA Tour Series-China has officially called off the 2020 season. The tour was originally halted back in February at the beginning of the coronavirus pandemic, but now as the virus continues its spread across the globe, officials have made the choice to scrap the season.

With travel restrictions in place for much of the globe and a bevy of international members on the tour, the decision is not a surprising one. The Mackenzie Tour made a similar decision earlier this summer.

“Like with the Mackenzie Tour, there was so much growing uncertainty in China with getting into the country and all the things associated with traveling there,” said PGA Tour Series-China Executive Director Greg Carlson. “We looked at many different options and scheduling models that might have allowed us to even play an abbreviated schedule, and it turned out to not be feasible.”

McGreevy makes the most of made cut

Max McGreevy has had a Jekyll and Hyde season on the Korn Ferry Tour. Coming into the week at the Price Cutter Charity Championship, he’d made just three cuts on the season. However, in all three of those tournaments he finished in the top 15.

This weekend in Missouri the boom-or-bust McGreevy hit big as he claimed his first career KFT victory, closing with a bogey-free 64. McGreevy started the day five shots back of the leader but used six birdies and an eagle to secure the one-shot victory. The win vaults the 25-year-old into the top five of the KFT standings.

“It was really just a great week,” McGreevy said. “It still really hasn’t set in. I’ve never won a four-round event before. I’ve won a lot of three-round events but to be able to put something together on the final day and finally actually do it in a four-round event means a lot to me.”

Tony Romo has a short week on the KFT

Tony Romo made his Korn Ferry Tour debut last week at the Price Cutter Charity Championship. It lasted all of four holes. The CBS football analyst withdrew mid-round, citing a wrist injury that also forced him to withdraw from a number of other events.

“If I could hold the golf club, I’d still be out there playing,” Romo said after his WD. “I just can’t.”

Romo reported early in the week that although his wrist was bothering him, he could still hit his driver at “80 to 90 percent,” but Thursday he showed up sporting tape on the wrist. He also withdrew from the American Century Classic — a celebrity event — two week ago.

Though the week was short lived, Romo said he’d love to come back and compete at the Price Cutter Charity Championship next year if given the opportunity.

Monday qualifier has a big week

Daniel Sutton had never competed in a PGA Tour-sanctioned event prior to last week, but with seven holes to play at the Price Cutter Charity Championship, he had a chance to win.

Sutton successfully Monday qualified after firing a six-under 65, and he continued the momentum into the tournament. He fired rounds of 66-67-68 to put himself into contention heading into Sunday and went out in four under during his final round to position himself for a run at the title. A one-over back nine ultimately ended his Cinderella run, but his solo fourth finish does guarantee him entry into this week’s Pinnacle Bank Championship.