Jack Nicklaus wins major No. 19 (sort of) and 2 other stories you might’ve missed 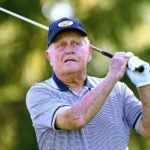 Jack Nicklaus won major No. 19 Sunday, all without leaving his couch.

Diabolical conditions at the Memorial, a Bryson-sized implosion and a new No. 1 were the top stories of last week, but there was plenty else happening in the world of golf. Here are three stories you might’ve missed.

As we reported a couple weeks back, the PGA Tour is planning to stage an eight-event fall series for players on international tours in order to help them recuperate some starts that have been lost due to the coronavirus pandemic. The Tour made the official announcement last week, revealing the LOCALiQ Series name and detailing the specifics for the events.

“We couldn’t be more pleased to make this announcement,” said PGA Tour Senior Vice President of International Tours, Rob Ohno. “To be able to provide this series and these quality playing opportunities is very gratifying.”

Purses for each event will be $100,000 and each winner will take home $16,000. The series starts the first week of August with three events in Georgia before moving on to Alabama and Florida to close out the series.

Incentives in addition to prize money includes PGA Tour starts as the top two points earners and the winner of the finale event will receive sponsors invites into a to-be-announced event on the 2021 schedule.

Davis Riley takes another step toward the PGA Tour

Davis Riley is one good week away from being on the PGA Tour.

The 23-year-old won his second Korn Ferry Tour title of the season as he won the TPC San Antonio Challenge last week. With the win, Riley is now one win away from a Battlefield Promotion to the PGA Tour, a special immediate promotion that is granted to any player who wins three times in the same season. Wesley Bryan is the last Korn Ferry Tour player to achieve a Battlefield Promotion after he won three times during the 2016 season.

“I’m excited to get to two,” Riley said after the win. “(But) the job’s not done yet. We’re getting to three.”

Though he is long retired, Jack Nicklaus claimed his 19th major championship title on Sunday.

Nicklaus won the R&A’s “Open for the Ages,” a hypothetical championship between some of golf’s all-time greats. The event utilized hours of archived Open Championship footage to piece together a seamless broadcast with former Open Champions battling it out at St Andrews. The winner was selected through a combination of fan voting and statistical modeling. The result was one more trophy for the Golden Bear.

“Did I just win a 19th major without leaving my couch?” Nicklaus tweeted. “Grinning face with smiling eyes. Seriously, thanks to the @RandA, @TheOpen and @GolfChannel for a creative and fun way to relive decades of The Open Championship.”