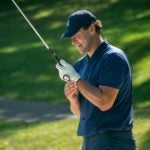 Tony Romo’s return to the professional golf circuit did not go as planned.

After completing several holes at the Korn Ferry Tour’s Price Cutter Charity Championship, Romo withdrew due to what he called a lingering wrist injury. The Korn Ferry Tour reported that he had played just four holes, while other media members on site reported between six and eight holes. The tour’s leaderboard listed Romo as 3 over par at the time of his WD.

After walking off the course — Highland Springs Country Club in Springfield, Mo. — Romo explained to reporters that he has torn cartilage in his wrist, according to Ozarks First.

“If I could hold the golf club, I’d still be out there playing. I just can’t.” Romo said.

Ozarks First reported that Romo was feeling good coming into the event, hitting driver at “about 80-90 percent.”

Romo showed up Thursday with a taped wrist. In his most recent start, two weeks ago at the American Century Classic (a celebrity tournament where Romo was the two-time defending champion), Romo withdrew after the second round due to a wrist injury.

The back-to-back WDs drew some immediate criticism on social media from some pros who believe Romo shouldn’t have accepted his spot in the field if he knew he was battling an injury. Had Romo withdrawn before the round, another player could have taken his place, but once he hit his opening tee shot, that was no longer an option.

The former quarterback has battled a number of injuries in the years since his retirement, including back injuries that forced him to WD from two prestigious amateur golf tournaments last season: The Dogwood Invitational and the Northeast Amateur.

High-profile athletes and celebrities from other sports have accepted several sponsor’s exemptions in recent years, as tournament organizers have tried to strike the balance between increased visibility for the event against giving highly-coveted spots to the most deserving golfers. Romo himself has played four PGA Tour events since 2018, missing the cut at the Corales Puntacana Resort & Club Championship in 2018 and 2019 as well as the AT&T Byron Nelson and the Safeway Open in 2019.

Romo’s best showing came at the Safeway, where he opened with an impressive round of 70 before a second-round 78 doomed his chances at making the cut. In 2018, Romo advanced through the pre-qualifying stage of Q-school by a single shot.

Romo said that he’d love to come back and play the Price Cutter Charity Championship again next year.