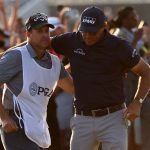 Brothers Tim and Phil Mickelson won their first major together at the 2021 PGA Championship.

Phil Mickelson is now a six-time major champion, existing in rarefied air, alongside fellow greats of the game and other six-time major champs Lee Trevino and Nick Faldo. And though Mickelson ended up with a two-shot advantage at the end of the final round of the PGA Championship on Kiawah Island’s Ocean Course, the result was never a sure thing until the final putt dropped. Mickelson battled hard all afternoon, trading multiple two-shot swings over the course of 18 holes with his playing partner, Brooks Koepka, until Mickelson finally emerged on top.

Mickelson has spoken at length about how getting a handle on his focus has been his key to success this week. And luckily, he has a caddie — his brother, Tim — who is able to reel him back in when he senses Phil’s mind might be starting to wander from the task at hand.

“I just told him to stop thinking so much,” Tim explained when he was asked after the round about how he assisted Phil’s historic achievement. “When he would get ahead of himself, I reminded him, Hey, we’ll worry about that when we get there. A few stories here and there. Maybe one or two might have been made up, who knows, but anything I can to keep his mind off of the shot that’s coming up when it’s not even our turn to hit.”

In his post-victory comments, Phil got a bit more specific, crediting his brother with giving him some tough love at a key point in the final round.

“I’ll tell you a perfect example, and this is an intangible that makes him relatable or understand me, get the best out of me and makes him a great caddie,” Phil said. “I’m walking off 6, I had made some uncommitted swings the first six holes. I had been striking the ball awesome the first three days. I had a wonderful warm-up session, like I was ready to go and I made some uncommitted swings the first six holes. He pulled me aside and said, ‘If you’re going to win this thing, you’re going to have to make committed golf swings.’ It hit me in the head, I can’t make passive — I can’t control the outcome, I have to swing committed. The first one I made was the drive on 7. Good drive on 7 gave me a chance to get down by the green and make birdie. From there on, I hit a lot of really good shots because I was committed to each one.”

Though Phil’s round was full of ups and downs, those opening seven holes (which included three birdies and three bogeys) were especially significant, and, thanks to an assist from his brother, helped set the tone for Phil’s eventual triumph.