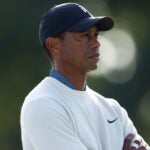 Tiger Woods missed the cut at Winged Foot for the second time in his career.

Tiger Woods will not be around for the weekend at the U.S. Open.

Woods missed the cut at Winged Foot for the second time in his career — the first just months after the passing of his father in 2006 — shooting rounds of 73 and 77 to finish four strokes outside the cut line. After missing just two cuts in majors during his first 54 starts, this marks his eighth missed cut in his last 26 starts.

“It’s frustrating that I’m not going to be here for the weekend and be able to compete for this great championship,” Woods said. “It feels like the way the golf course is changing, is turning, that anybody who makes the cut has the opportunity to win this championship. I didn’t get myself that opportunity.”

After closing Round 1 in less-than-stellar fashion, Woods came to Winged Foot for his second round poised to grit out a number on a day when the course was breathing fire. But with the course punishing anything less than perfection, he was never able to gather any momentum.

Starting on the back nine, Woods posted pars on his first four holes before dropping a shot on the 14th. He bounced back with a par on the next, but doubles on 16 and 18 sent his round into a spiral as he posted 40 and inched toward the cut line.

The front nine was more of the same for the three-time U.S. Open winner. He again began with a par, but four bogeys over his next five holes all but guaranteed it would be a short week. Woods was able to finish by playing his last three holes two under, but it was too little, too late.

So, what went wrong for Woods at Winged Foot? The driver wasn’t exactly dialed in, which makes for tough sledding at a course like Winged Foot, but the real issue was his play around the greens. The deft touch he usually showcases was absent all week and he lost nearly 2.5 strokes around the greens. On the 18th hole, he took two chips to get on the green, leading to a sloppy double bogey. That was just one instance of many where he was unable to scramble for much-needed pars.

“I’m not going to be swinging a club for a little bit,” he said. “Then (I’ll) refocus and get back after it. There’s still one more major to go.”