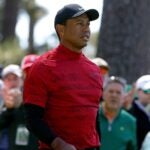 Tiger Woods in his trademark red shirt on Sunday at the 2022 Masters.

Tiger Woods made his eagerly-anticipated return to pro golf this week at the 2022 Masters. It was somewhat miraculous, given that 14 months ago, while recovering from back surgery, Woods nearly lost his right leg in a horrific car crash. But now that his comeback is complete, one question rises to the forefront: when will Tiger play next?

He gave us insight into that question on Sunday at Augusta National.

After closing out a final-round 78 to finish the Masters at 13 over, Woods spoke with SkySports about his plans going forward.

“I won’t play a full schedule ever again, it’ll be just the big events… I don’t know if I’ll play Southern Hills or not,” Woods said. “But I am looking forward to St. Andrews.”

He continued, “That’s something that is near and dear to my heart… it’s my favorite golf course in the world, so I will be there for that one. But anything in between that I don’t know.”

His answer was revealing, but for those of you struggling to parse his response, here’s some explanation to help.

Woods has repeatedly said that if he were to return to pro golf, he would play far fewer events than he used to, with a focus on the major championships. The next major on the schedule is the 2022 PGA Championship, beginning May 19, which will be played at Southern Hills in Tulsa, Okla.

But just because Tiger was able to play the Masters and his body held up against several rounds of golf, that doesn’t guarantee he’ll be fit enough to go at it again at the PGA in May. The next major after that is the U.S. Open in June at The Country Club in Brookline, Mass., which Woods failed to mention in his brief interview on Sunday.

However, one thing is sure from his comments — he plans on playing the Open Championship at the Old Course at St. Andrews in July. The home of golf is where he has captured two of his three-career Open Championship victories.

There is some hope for those fans who don’t want to wait until July to see Tiger play, though. Southern Hills happens to be the location of Woods’ most recent PGA Championship victory, in 2007.

We’ll just have to wait and see.