Tiger Woods’ 2019 schedule: What tournament will Tiger Woods play next?

Sure, watching Tiger Woods win the Masters was exciting. But we’re a what-have-you-done-for-me-lately culture, and we like to look ahead. North Carolina golf fans were dismayed when Woods elected to skip the Wells Fargo Championship at Quail Hollow, but Woods has earned the chance to revel in his green jacket. Now the Augusta dust has begun to settle and it’s time to peer at the Tiger Woods Schedule for the rest of the 2019 season. Where will his next tournaments be? Where will he skip?

Here’s what we know, and what we don’t, about when we’ll see Woods in competition next.

YES. It’s a major. Don’t even need to hear from TW on this one. The only adjustment you’ll have to make is that after a decade-plus as a 14-time major winner, Woods is now entering the PGA as a 15-time major champ. Plenty of people will ride Woods as the favorite at Bethpage, too, even after a month away from competition.

YES. Woods only skipped Arnie’s event in Orlando because of injury concerns and because it was at a tight spot in his schedule. He definitely won’t skip Jack’s event in Columbus. Muirfield Village has been plenty hospitable to Woods throughout his career — he won in 1999, 2000, 2001, 2009 and 2012 — and he even threatened to contend last year before late mistakes saw him slip to T23.

Note: Apologies to the Charles Schwab Challenge and the RBC Canadian Open, but he won’t be there.

YES. Watching Tiger Woods attack Pebble Beach 19 years after his 15-shot victory is guaranteed to be a treat. Everything about Pebble this year will be a treat. It’s Pebble Beach! It’s the U.S. Open! 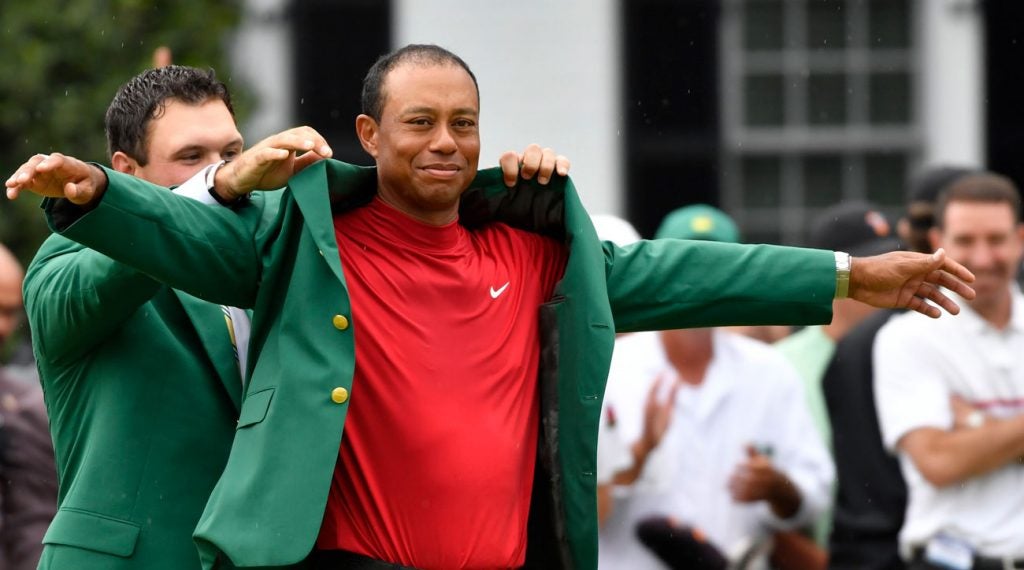 NO. Why would he? The Travelers has done impressive work attracting fields, but if there’s no super-compelling answer to that question, you already have your answer.

MAYBE. Now this is where it gets interesting. An entire month between tournaments is less than ideal, which would point towards Woods playing either two or three weeks before the British Open. Three weeks ahead puts him in Detroit for the debut Rocket Mortgage Classic at Detroit Golf Club. The event has already landed Rickie Fowler and Dustin Johnson; can they land the big prize?

“At the end of the day, it’s the player’s decision,” Jay Monahan said last week, speaking to the Rocket Mortgage organizers. “A lot of factors go into their decision making. All we do is help them be as informed as they possibly can.”

Woods has played well historically in the Midwest — he’s won 13 times in Ohio, seven times in Illinois, and even three times in Michigan. Time to get back? That depends. If Woods’ light schedule pays off with a strong showing at the PGA Championship and the U.S. Open, he may not feel the need for another start. He also could be hunting Presidents Cup points, which would give him further incentive.

Still, I’d lean towards no. That’s because…

MAYBE. Woods does tend to like that two-weeks-before-a-major approach, which leaves Minnesotan tournament organizers feeling optimistic about leg two of the newly minted Midwest swing.

Tournament Director Hollis Cavner went on the record with this optimistic bit, according to WCCO: “We had talks with him already, and he likes to play two weeks before a major. Go back and look at his record. Two weeks before every major, he plays,” Cavner told Dave Lee. “Tiger’s people said the same thing, if he plays anywhere he’ll play us, not anywhere else. Let me tell you, these guys are very regimented in their schedules and how they prep.”

The field is already loaded: Phil Mickelson, Brooks Koepka, Jason Day, Bryson DeChambeau, Patrick Reed and Tony Finau have committed. Its appealing place in the schedule means we could see Woods, too. I’m leaning towards yes, but I wouldn’t bet money on it.

NO. Here’s a prediction: You will hear people suggesting Woods will play the Scottish Open to prep for the British. You may hear that tournament organizers are targeting him, and that they’re in talks with his camp. My prediction is that these predictions will be a bunch of nothing. Woods feels plenty confident in his game to stick to his routine, which includes not playing tournament golf the week before a major.

YES. This is a Presidents Cup captain looking to cement his status as playing captain. He played WGC-Mexico. He won’t skip this one, not unless he picks up multiple wins between now and then.

YES. The defending champ! He’ll be back.