As Francesco Molinari took his drop from Rae’s Creek at No. 12 on Masters Sunday, fans noticed a certain something in the background: Tiger Woods was already standing on the green. And according to Rory McIlroy, that was no accident.

McIlroy’s Golf Channel podcast co-host Carson Daly asked him whether he thought Woods’ positioning was intentional. “Does he do little things like that?” Daly asked on the pod.

“Just sorta having that little glimpse of red in your eye?” McIlroy asked with a laugh. “A hundred percent. I mean, he knows that he intimidates people and it’s like, ‘I’m going to make you feel my presence.'”

Molinari had already made his worst mistake of the hole by dumping his tee shot in the water (as had their third, Tony Finau). He dropped and hit a solid wedge to just outside of 10 feet. Woods, meanwhile, had found the middle of the green — but left his birdie putt some seven feet short. Suddenly, there was the possibility that both players would make bogey anyway. 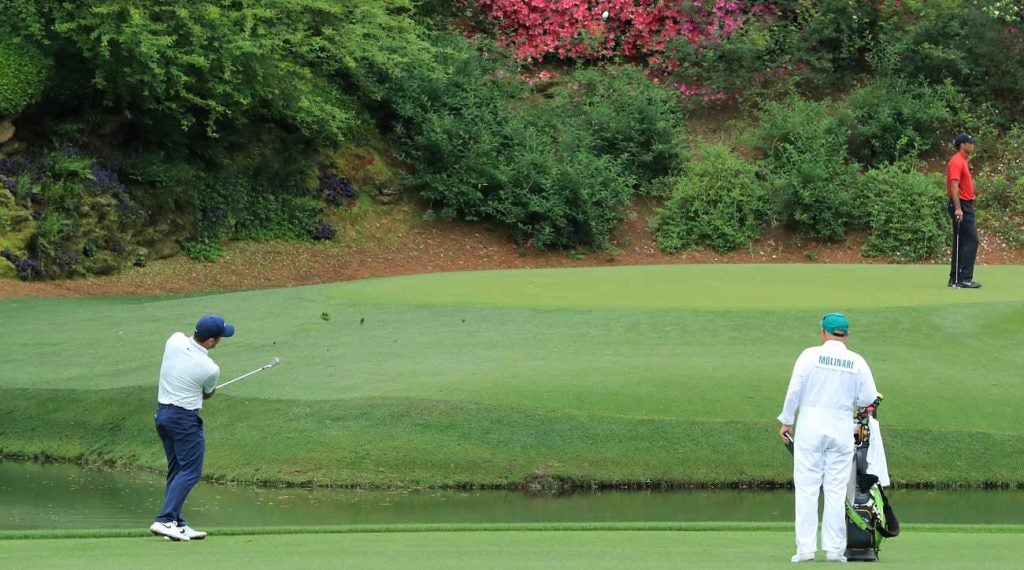 Was Tiger Woods just getting ready to line up his putt, or did he have intimidation in mind?
Getty Images

But it didn’t work out that way. Molinari missed his putt; Woods made his, and the two were suddenly tied.

The rest was history: Molinari’s title hopes drowned for good in the pond on No. 15, while Woods hit a round-clinching 8-iron inside two feet on No. 16. McIlroy cited his on-course presence — and his wardrobe — each as important factors.

“One of the things that helped this whole thing is that mock-neck turtleneck thing that he came back with, people correlate that with that ’05 Masters win,” he said. “And it probably made him feel good.”

When Woods finished off the win, McIlroy, who had finished a couple hours before, said he was moved to tears.

“I cried whenever he hugged Charlie, it was so emotional and I think a lot of people — I was sitting beside my wife Erica and I could see the tears going down … I felt like I was a 10-year-old kid again watching Tiger win the Masters like he did, I felt like, every year that I watched it.”

You can hear more from Daly and McIlroy here.