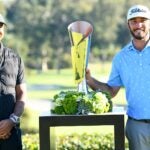 The first real conversation Max Homa had with his childhood hero, Tiger Woods, came at the 2019 Memorial Tournament. Homa was fresh off his debut PGA Tour win at Quail Hollow, and golf’s biggest name had taken notice. Woods approached him at the range to offer his congratulations.

“The fact that he actually came up to me? That was really, really special,” Homa said on Wednesday. “I tried to play it cool.”

On Sunday, when Homa won his second PGA Tour event, he didn’t have to wait long to receive a second congratulations from Woods. That’s because this time, he’d won Tiger’s own tournament, and the host was on site to present the trophy.

“I saw Tiger the other day. I was too scared to talk to him,” Homa said immediately after his win. “But he’s forced into talking to me today, so it’s going to be a pretty awesome moment.”

Homa, who had been attending the L.A. Open since he could walk and called it “1A, 1B and 1C,” on his tournament bucket list, couldn’t believe the moment. He choked up in a post-round interview with Amanda Balionis. And he was starstruck when he received the trophy from Woods, one son of southern California to another.

Homa apologized for missing a three-footer for birdie on 18. You’re not supposed to do that sort of thing in front of the tournament host. But Woods insisted that the miss had only made Homa’s win that much more impressive.

“No, no,” Woods said. “That showed a lot of toughness to bounce back from that.”

Homa was in heaven.

“I was as happy as I could possibly ever be,” he said.

After the tournament, Homa navigated a flood of logistics. He was suddenly qualified for this week’s WGC-Workday, so he scrambled to make travel arrangements. He recorded a podcast. He called into several others. He went home and then got ready to leave. This process can be a pain. Not this time.

“None of it mattered,” he said. “Because Tiger Woods handed me a trophy.”

But when Homa landed in Sarasota on Tuesday afternoon, he opened his phone to an onslaught of text messages.

I can’t believe it.

What are you feeling right now?

Homa’s heart was racing. He saw the headlines and then the pictures. And then, like so many others, his mind went immediately back a year to another tragic L.A.-area accident.

“My mind, like a lot of people, immediately went to the worst. It felt eerily similar to the Kobe Bryant crash, and it was awful,” Homa said. The photos, the real-time reports, the helicopter shots of officers picking through hillside debris — it was all so familiar. And it felt personal.

“If there were two people in the world, outside of my family, that I’d say, ‘Thank you’ to, the first two would be Kobe and Tiger,” Homa said. “To say, ‘Thank you for building the lives you have, and for letting people like me look up to you, getting better at sports, at everything, because of you.’ It was very weird the parallels, the way it was Kobe and then it was Tiger.”

When the news came in afterward indicating that Woods’ injuries weren’t life-threatening, Homa felt a wave of relief.

“I feel very thankful that it sounds like Tiger will be okay. Forget golf — I think that’s the furthest thing from what should be on anyone’s mind. I just want him to be able to live a normal life with his family. I know, it’s weird to feel like this about somebody you don’t really know, but that’s the effect that someone like Tiger Woods — or Kobe Bryant — can have.”

The only part Homa got wrong is thinking it was weird for him to be so invested in Tiger Woods’ well-being. Well-wishes and tributes poured in from dozens of Woods’ peers, many of whom come from Homa’s generation — the Tiger Generation — and count him among their heroes as well as their friends. Tony Finau. Jon Rahm. Bryson DeChambeau. Justin Thomas. Rory McIlroy. Millions more, people Woods has never met, monitored every new bit of information closely, hoping for some glimmer of hope on the sports legend’s condition.

For Homa, the crash felt that much more surreal knowing he’d just shaken Woods’ hand some 36 hours before. But he insisted he would have run through the same gamut of emotions regardless: scared, relieved, nervous, hopeful.

Among Homa’s favorite Tiger stats is his streak of 142 made cuts in a row, an unfathomable stretch of consistency. “He comes to compete,” Homa said. “Even when he doesn’t feel great, he grinds it out.” That’s the mentality Homa thinks will key Woods’ recovery.

For his part, Homa was off to the range to hit a few balls before a 9-hole warmup — the only preview he’ll get of this week’s golf course. It’s been a busy week, after all. But Homa will try to channel that grind-it-out mentality.

“We can honor him by coming here to compete,” he said. “We’ll play a little golf, the kind that would make him proud.”