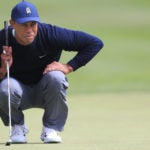 What does Tiger Woods need to do to contend on the weekend?

Tiger Woods’ re-emergence last month at the Memorial was a play in three acts. First, he came out red-hot. He birdied two of the first three holes, surged to the top of the leaderboard and sent golf fans into a tizzy.

Then he faltered on Friday, looking out of sorts all round before a furious rally to make the cut.

Over the weekend, his game stalled out en route to a T40 finish.

So far, Woods’ week at the PGA Championship is following the same script. On Thursday, he came out hot and worked his way into the mix with a two-under 68. Friday he took a step back with a two-over 72. Now he’s even par heading to the weekend, one shot inside the cut line and eight shots off the lead. T45.

So far, it’s tracking pretty similar. But Woods didn’t fly cross-country to finish T40 again — so how does he keep this weekend from continuing on the same trajectory? Here’s the blueprint for Saturday and Sunday at TPC Harding Park.

1. Get hot with the putter.

One of the bigger equipment-related surprises of the week came when Woods benched his trusty Scotty Cameron. The move seemed to pay off on Day 1, when he made 115 feet of putts and finished 36th in the field in Strokes Gained: Putting.

Day 2 was another story. Woods looked out of sorts on the greens from the first hole, where he missed a seven-footer for birdie, and missed a handful more good looks on the opening nine. Through seven holes he’d holed just eight feet of putts.

Woods attributed the poor putting to a combination of factors. For one thing, he and Justin Thomas agreed that the practice green was significantly faster than greens on the course, and it took some time to make the adjustment. He got tentative on some grainier putts, too, afraid to send them too far past the hole. Afternoon gusts made it trickier to calculate. And the greens got slower as the day went on, too.

“I really struggled with getting the speed of the greens today,” he said. “They were firm coming into the greens, but they weren’t putting as fast as they looked, and then as the day wore on, they got a little more fuzzy and got even slower, and I struggled even a little bit more hitting the putts hard enough.”

Things picked up slightly with the flat stick on the back nine, as Woods holed mid-length birdie tries at 10 and 16. I’ll stop short of making any equipment-related suggestions to this generation’s greatest golfer — he seems to know what he’s doing! — but I do wonder if he’d be tempted to bring the Elder Wand off the bench for a weekend charge.

Some players went low during Friday’s second round despite missing a whole bunch of fairways. Second-round leader Haotong Li hit just 4 of 14 fairways en route to a five-under 65, while Dustin Johnson hit just 3 of 14 in an impressive 67. Woods has been far more accurate with the big stick, hitting 7 of 14 on Thursday (okay) and 9 of 14 Friday (better).

When asked for his biggest takeaway from Friday, Woods highlighted his driving.

“Yeah, you know, I drove it great today. That’s one of the things I wanted to clean up from yesterday,” he said. “Today was different.”

That sounds good. He needs it to continue. Woods still has the short game to hang in there when he’s missing fairways, but if he’s got any chance of making a charge from eight shots back, he has to give himself as many looks as possible. Woods is 44 years old and this is a major championship weekend, which means he’s probably not getting those birdie looks from the rough.

Look, Woods’ irons have been fine. It’s just that we’re used to his irons being spectacular. He short-sided himself a few times on Friday, uncharacteristic misses for an all-time great game-planner.

On the week, Woods ranks 52nd in Strokes Gained: Approach the Green, which is fine. But on weeks where Woods contends, his irons are his calling card. With just half the event left, we’ll see if he can eliminate those costly misses while converting on the looks he’ll inevitably create for himself.

Woods will go off well before the leaders, and that may give him the opportunity to make a move before the winds pick up and the greens firm up for the afternoon. At least, that’s his best recipe for success.

“I’m going off early and hopefully I can get it going,” he said. He’s already scouted Saturday’s pin positions (“some tough spots”) and sees room for a big move.

It’s hard to pinpoint exactly the score that Woods will need on Saturday to get into contention; with 10 players at five under or better, he’ll likely need to pick up at least a handful of shots relative to par. Woods generally has a number in his mind before a Moving Day round, and he’s delivered on those numbers more than a few times.

As for his game plan? Woods put it pretty succinctly.

“If I can get myself in position where like I did today off the tee, I think I can have a really good weekend.”

At the beginning of the week, Woods reminded everyone that he was here to win. Friday night, he was asked if he still had a chance to do so.

I’ll let you guess how he answered.