It’s become a cliche on its own by now: Tiger’s body just isn’t what it used to be. Multiple surgeries, a fused back and natural effects of aging will do that.

In all circumstances, that certainly limits the athletic prowess that once overpowered the Tour. But it also means his chances of competing drop precipitously in poorer weather conditions. At the U.S. Open, Woods struggled to loosen up amid the chilly, overcast conditions. Similarly murky conditions are practically sewn into the ethos of the Open Championship throughout history, a trait that has led some to question Woods’ viability at this week’s Open at Royal Portrush. Woods got his taste of how that might play on Wednesday, when he faced steady rain during his practice session.

News
The Open 2019: 5 things that need to happen for Tiger Woods to win The Open

An empirical analysis put together by the Wall Street Journal puts the impact of poorer weather on Tiger in stark context. The entire breakdown from Brian Costa is well-worth a read here.

“In tournaments in which the average midpoint of the daytime temperature range has been 75 degrees or above, Woods has two wins, including at the Masters in April, and an average finish of sixth place. During that span, not once in such conditions has he finished outside the top 25.

When the weather is neither cool nor hot, the same can often be said of Woods. Between 65 and 74 degrees, he has posted an average finish of 24th place, with one missed cut.

When the extra clothing layers come out, his scores tend to go up. In average temperatures below 65 degrees since the start of 2017, Woods has an average finish of 46th place, with three missed cuts. That’s not counting the 2018 Ryder Cup, when Woods lost all four matches for the U.S. on a 56-degree weekend in France.” 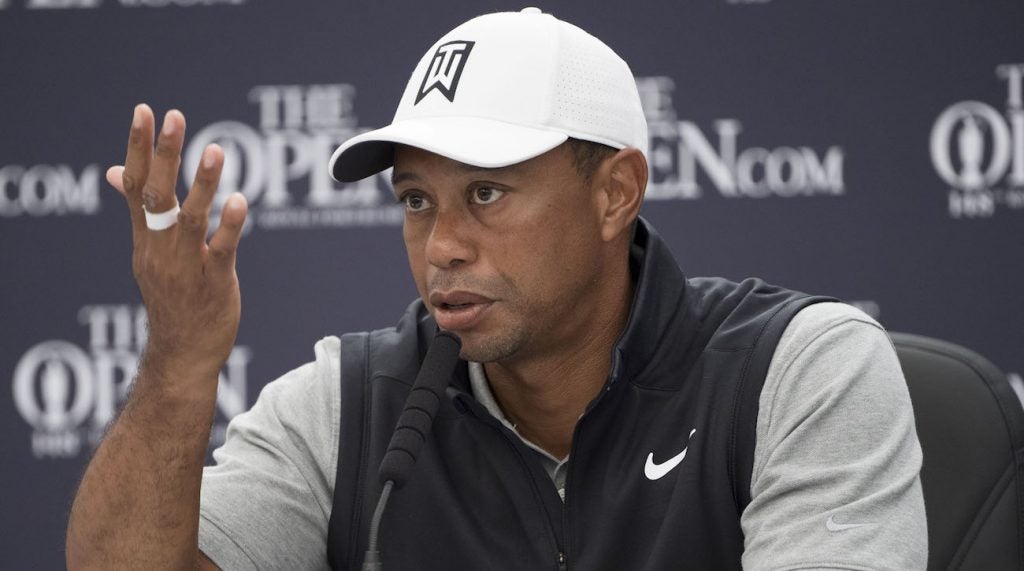 Tiger tees off at 10:10 a.m. ET on Thursday — 3:10 p.m. local time in Northern Ireland — and could face those adverse conditions from the get-go. According to Accuweather.com, there’s a 62 percent chance of precipitation at Portrush tomorrow. The high temperature is 64 degrees Fahrenheit, with a low of 53, with “real feel” temperatures dipping as low as 48. The temperatures should remain within that range throughout the weekend.

Showers could be sporadic throughout the day — a hit or miss proposition that could dictate who has a window to go low during the day. Accuweather predicts rain showers at 3 p.m. local time, partly cloudy at 4 p.m., showers coming back at 5 p.m. and then rain-free until 9 p.m. So, in other words, welcome to the Open.

Accuweather predicts winds holding steady in the low teens throughout his round. That’s enough to make an impact, but could be worse, all things considered. Woods has said he’s been working on all types of shots, with all types of trajectories in anticipation of the way the conditions might change the course. He has also said, though, that he’s not quite ready for what Portrush is going to bring.

As we’ve learned over the years, the weather could change in an instant, and with it, so should the impact on Tiger’s game. But if the temperatures dip and the rain starts falling, his chances drop with it.