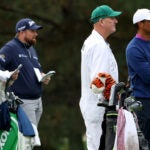 Over 65 holes at last week’s Masters, Tiger Woods hit 38 out of a possible 51 fairways at Augusta National Golf Club. The defending champion was 10 of 14 in the first round, 12 of 14 in the second, nine of 14 in the third, and 7 of 9 just over the halfway point in the final round. He would tie for a respectable 16th in the field in driving accuracy, at 76.79 percent.

But whenever he’d miss a drive, apparently, he’d find his caddie, Joe LaCava.

“It’s funny because any time he hit like a bad drive or an average drive, he’d say to Joe (LaCava), his caddie, he said, ‘Joe, that’s like one of yours, Joey,’” Shane Lowry said this week on the From the Horse’s Mouth podcast. Lowry played with Woods during three of his four rounds.

And Woods hit his tee shot on the 155-yard, par-3 12th into Rae’s Creek. And he spinned his third shot, after a drop, into the water, too. And he hit his fifth shot, after another drop, into a back bunker. And, from there, Woods hit his sixth shot over the green and back into the creek, he hit his eighth, after another drop, just short of the green, and he two-putted. For a seven-over 10, his highest-ever score as a professional.

Lowry, himself, likely wouldn’t have been able to find the words. Here he was playing a tournament with his childhood idol for the first time. And here he was with a birdie 2 to Woods’ septuple-bogey 10.

“When he was having that, I couldn’t just believe what was happening,” Lowry said. “That just shows, that hole, it’s just – people think it’s 150 yards, the easiest hole, it should be easy. It’s one of the most brutal holes in golf. The wind swirls down there, the green is soft and spinny. Like it’s a huge sigh of relief when you actually hit the green, and to watch him do that was a bit like, ‘Oh my God.’”