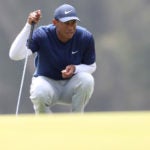 Tiger Woods lines up a putt on the 16th hole at TPC Harding Park on Saturday.

Tiger Woods rolled in the 10-foot, 1-inch putt on the 14th hole at TPC Harding Park. Over the previous 13 holes during Saturday’s third round of the PGA Championship, he had not rolled in his first putt on any green. The longest putt he had made was just under 5 feet.

“And I said, ‘You haven’t said that all day,’ because I hadn’t made anything,” Woods said to GolfTV.

It was nice to hear.

Woods finished with his second straight 2-over 72. He was 2-over and in 59th place while playing in just his second tournament since mid-February. He had made just about 50 feet worth of putts in the second round and about 20 feet more in the third round – a lot of tap-ins.

There wasn’t much to be happy about. But Woods was smiling. In a trying week, Woods was still trying.

“You just keep fighting, no matter what, whether the rounds are shooting 61s or they’re shooting 81s, intensity should always be there, the effort should always be there — that’s something we can control — and keep fighting till the end,” the 15-time major champion said. “It’s pride in what I do, and I love to compete, and, unfortunately, I didn’t do a very good job of my job early on today, and finally at the end, it clicked.”

“Yeah, I hope so,” Woods told GolfTV when asked if he would like to hear from LaCava again.