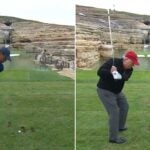 Tiger Woods and Jack Nicklaus hit their shots on the par-3 19th hole at Payne's Valley on Tuesday.

In case you missed it, Tiger Woods’ newest golf course design — and first public course — Payne’s Valley made its world debut on Tuesday in a made-for-TV match with some of the game’s best players.

The Payne’s Valley Cup pitted Tiger and Justin Thomas against Rory McIlroy and Justin Rose in a mix of match play formats, all supporting the Payne Stewart Family Foundation. The play on the course was a somewhat ho-hum affair, though it did have it’s share of funny moments, including Rory’s go-to Domino’s order.

But the point of the event was to showcase Tiger’s new course at Big Cedar Lodge in Missouri. And as far as that goal goes, it was a roaring success. The course is stunning, and interest in Big Cedar Lodge is no doubt spiking.

One of the most talked about aspects of Tiger’s new design is the par-3 19th “bonus hole.” This is no ordinary par-3. Players hit to an island green surrounded by breathtaking rock faces on three sides. Tiger has made it clear that he intends to maximize the fun in golf with his design work, and this is the best example yet of that.

It’s no surprise then that one of the best moments from the Payne’s Valley Cup happened at the 19th hole, where the match culminated. Fans got to see all four players take on the island green. To take it to the next level, two other golfers joined the foursome for the closest-to-the-pin contest: all-time golf legends Jack Nicklaus and Gary Player.

Amazingly, all six players hit the green and got their balls to stop before falling into the water, including 80-year-old Nicklaus and 84-year-old Gary Player.

You can watch all six shots — and find out who won — below.

And here are alternate views of Jack and Tiger’s shots, complete with the post-shot congratulations (and jokes) from the other players.