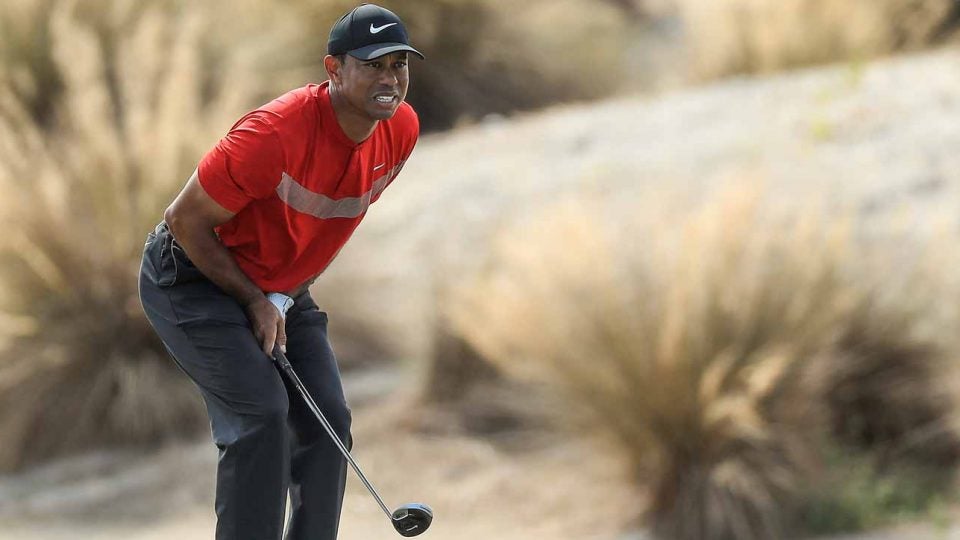 NEW PROVIDENCE, Bahamas — This week, Tiger Woods was tournament host and a competitor. Next week, he’ll be Presidents Cup captain and competitor. But for a short while during Saturday’s final round at the Hero World Challenge, Woods claimed another title: outright leader. But that one wouldn’t last.

Woods rolled in a short birdie putt at the par-4 7th to get to 14 under, one shot clear of a hefty chasing pack. But that was as close as he would come to the title; Woods’ round stalled out and he finished at 14 under, good enough for solo 4th — four shots behind winner Henrik Stenson.

Woods was in good spirits after his round, though he admitted he was still stewing over a few poor shots. When asked which ones he’d take back, Woods shook his head. “All of them,” he said. “It wasn’t good enough.” Going into the round, he’d targeted 66 as a number to get him into a playoff; in reality he would have needed 65 to tie Stenson.

Despite the disappointment, Woods made it clear he’s moving on quickly to his duties as Presidents Cup captain. Those begin with making sure everyone gets on the team’s charter flight to Melbourne.

“We’ve got 23 hours in a tin can, so we’ve got a long way to go down there,” Woods said. “The guys will be relaxing, doing whatever we need to do. We’ve got a bunch of stuff to sign for the tournament, so the guys will be taking care of that. Lots of reading, lots of card playing and lots of needling.”

Woods added that he was glad 11 of the 12 players on the U.S. Team were able to play in the Bahamas this week to get them in form for the Cup. He cited Rickie Fowler, who hasn’t played since the Tour Championship but shot 68 Sunday to finish 9th. He added that he hopes Dustin Johnson, who missed this week for a final stretch of knee rehab, will be ready to go after the lengthy flight.

Woods also addressed the team member likely to draw the most attention last week: Patrick Reed. Reed found himself in a rules controversy when Golf Channel cameras captured him moving sand with his wedge during Friday’s third round. He was leading at the time, but ended up with a costly two-stroke penalty and plenty of criticism. Woods insisted he wasn’t worried about the penalty becoming a distraction.

“Of course we’re going to be asked, but when it comes right down to it we’ll just get ready to play and play,” Woods said. “Whatever Patrick has put out there is he’s focused like he is in every Cup, he just goes out and he gets his point. Next week will be no different.”

As for himself? Woods said he’s encouraged by his game. “I think it was more of a continuation of what I did in Japan,” Woods said. “I hit the ball about as well and I didn’t quite hit it close enough … consequently, I ended up short.”

From just short to too long. The charter leaves the Bahamas at 8 p.m., where a combination of players, caddies, families and officials will fly to Acapulco, Mexico for refueling. Then it’s the long haul: Nearly 18 hours on the plane before landing in Melbourne at 10:30 a.m. Monday morning. That’s when Captain Woods will get to work.

“The guys will be ready,” he said.