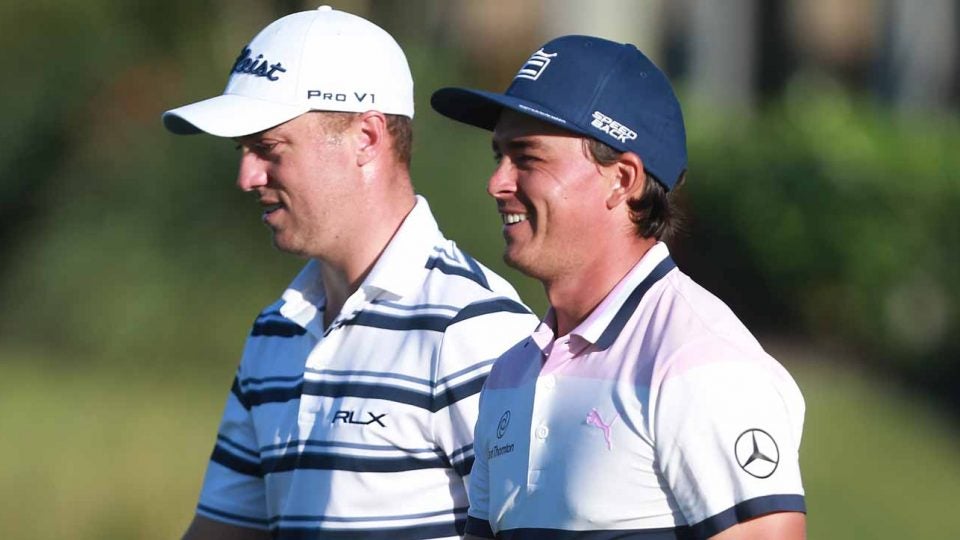 NEW PROVIDENCE, The Bahamas — You’ll recall that at the 2017 Presidents Cup, Tiger Woods made the worrisome declaration that he may never play competitive golf again. What you might not have known is that at that same time, two of the players on his team were doing everything they could to make sure that wasn’t the case.

Justin Thomas and Rickie Fowler, who live near Woods’ home in Jupiter Island, Fla., prodded Woods at the time. They’d go to his house, messing around with wedge shots in the practice facility in his backyard, or they’d bring him out to dinner just to hang out.

News
This guy paid $75,000 to caddie for Tiger Woods — here’s what he learned

Both he and Thomas mentioned how much they’d learned from Woods during that time together.

“So many shots from Tiger messing around with him at his house,” Thomas said of the practice sessions at the time. “Different shots that will spin, go straight up in the air or run out and go left on the green and stuff like that.”

More than the advice, though, it was being there that was important. On Friday at the Hero World Challenge, on the eve of Woods’ Presidents Cup player-captaincy, he was asked about the support of his younger peers through the years.

“Well, they’ve been great friends,” Woods said.” I’ve known Rickie a little bit longer, obviously, because he’s a little older. JT came out [on Tour] when I was kind of out, and so I spent a lot of time at home with him having dinners and him coming over to the house and chipping around and talking about a bunch of different things, really. About the Tour, shots, picking my brain.”

As Woods recovered, Fowler and Thomas were there every step of the way. When Fowler said that Woods was hitting the ball “way by” him during casual rounds of golf, fans started to hope for another chapter in the comeback.

“When I started playing again, I played a lot at home with JT at Medalist and we play a ton of practice rounds together and practice a lot. It’s been a lot of fun to get to know these guys. JT’s pretty young and I think Rickie’s still young. It’s a good group of guys.”

The one thing Woods hasn’t been able to do? Beat Thomas when it matters. The 26-year-old is 10-0-3 when playing in the same group as Woods, a number Tiger is hoping to change during their Saturday finale at the Hero World Challenge. Of course, we don’t have the numbers on their matches at home, the most recent of which took place Saturday.

“We have played quite a few money matches,” Woods said with a grin. “It’s been good.”