How Tiger Woods says he could still contend at the Genesis 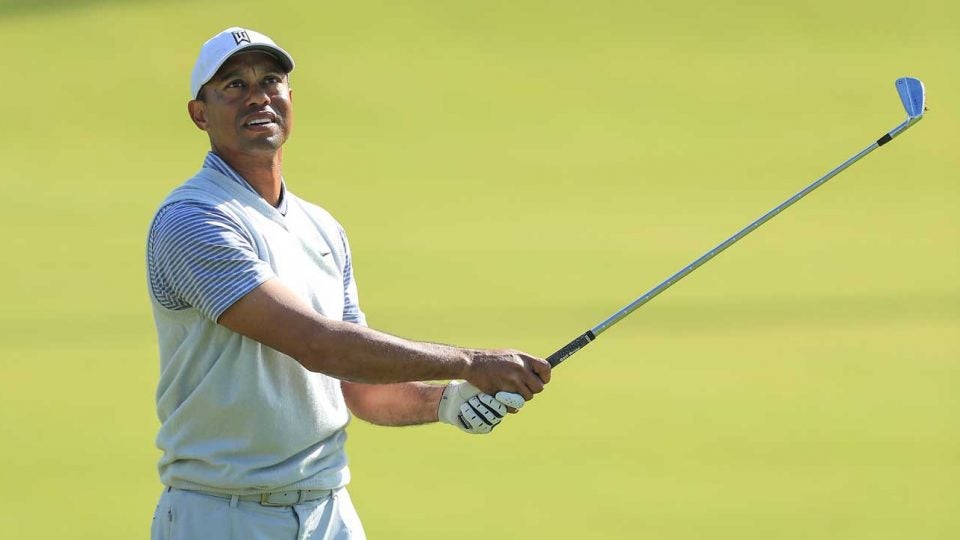 Tiger Woods battled to a 2-over 73 on Friday at Riviera.
Getty Images

PACIFIC PALISADES, Calif. — Friday at Riviera, Tiger Woods played what was likely his worst round of this PGA Tour season. He ditched the driver woes that had plagued his opening round, but replaced them with a uncharacteristically sloppy iron play. Still, the tournament host hung just inside the cut line and has his eye on a weekend charge.

Woods’ round started off well when he snuck in a 12-footer from the fringe at No. 10 for an opening birdie, and he added birdies at the par-5 17th and the par-5 1st. But a few costly errors ejected him from contention. On No. 15, he had just 144 yards left from the fairway, plugged in the front bunker and made double bogey (“I just hit it fat,” he said). He found another bunker from 131 yards at No. 4.

“Today I played those two holes with a wedge and a sand wedge three over par. You take those away and I’m near the top of the board. So it’s not that complicated,” he said.

Woods finished with a whimper, missing a five-footer for par at No. 5 and three-putting for another bogey at No. 7. Two closing pars added up to 2-over 73 and left him at even par at the tournament’s halfway mark.

“I just need to clean it up, but I’m now pretty far back and I have to make a lot of birdies this weekend,” he said.

So how does Woods make a move on the weekend? Or is it too late?

“Get some rest, get refocused tomorrow. I know with where I’m at right now I’ll probably be off the back nine. Hopefully I can get off to a quick start like I did last year, hot birdie run and maybe make an eagle in there like I did last year. I need a start like that tomorrow to get myself back in this thing.”

On Thursday, he was the best irons player in the field (1st in SG: Approach) and stuffed multiple shots to kick-in range, but couldn’t find the planet with his driver (118th in SG: Off the Tee). Friday was a better day driving (gaining over half a shot on the field) but his irons (-1.2 strokes gained) and his putter (-2.3 strokes gained) deserted him.

Although Woods cited his “busy week” on both Thursday and Friday, he didn’t connect his schedule to any mistakes on the course.

“They’re challenging weeks in themselves, talking to the staff and sponsors and different obligations that a tournament host has. But I’ve been involved in events, jeez, since ’99, so been doing this a very long time and this is no different,” he said.

Because it’s tough to go crazy low at Riviera, a weekend “charge” may not mean 10 or 12 birdies. It may just mean chipping away at the leaderboard. But it will require all facets of his game showing up at the same time.

Fitness
The 5 worst things you can eat before a round

Sunday at Riviera may also be the last time we see Woods for a few weeks. Even though the deadline was just a couple hours away, Woods said he hadn’t had a chance to think about whether he’s headed to the WGC-Mexico next week. “I’ve been so busy with this event and trying to deal with all the little things that I haven’t really focused on next week,” he said.