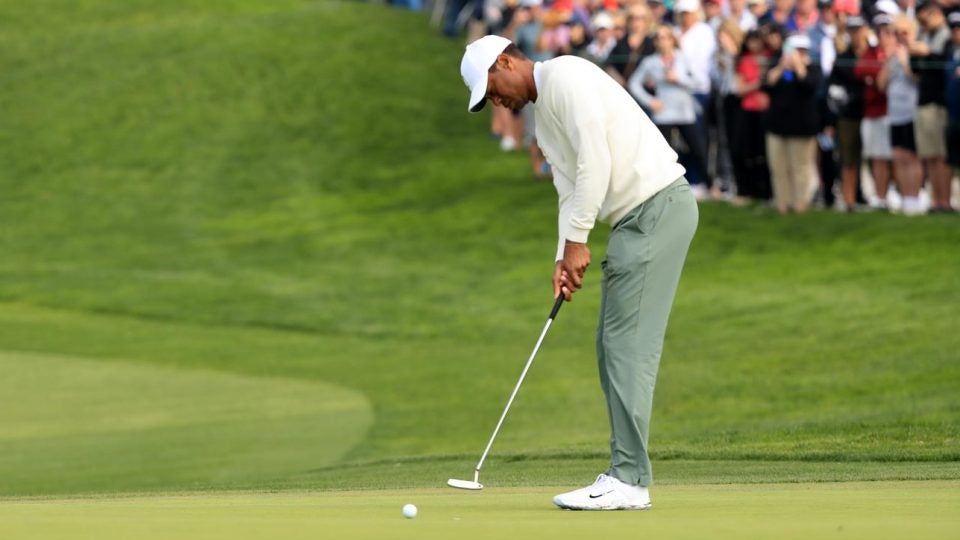 Tiger Woods putts during the second round of the 2020 Farmers Insurance Open.
Getty Images

Tiger Woods’ second round at the 2020 Farmers Insurance Open started in disastrous fashion with something we never see from Tiger: a four-putt. But some observers believe bumpy greens at Torrey Pines are at least partially to blame, and Woods agrees.

Tiger opened the Farmers, his first tournament of the new year and first PGA Tour event since October, with a fine three-under 69 on Torrey’s North Course. For Friday, he switched to the more difficult South Course, site of his dramatic 2008 U.S. Open win.

With fans prepared for Tiger to go low and challenge the lead, the exact opposite happened: he made double bogey to fall off the pace and bring a potential missed cut into the equation right off the bat. Unlike what may have been the case earlier in his career, he couldn’t blame the crooked number on a wild tee shot, as he blasted his drive into perfect position in the fairway. Same goes for his approach, which, while not perfect, settled on the putting surface about 25 feet from the hole.

The real culprit for Tiger’s opening double was his regretful performance on the 1st green, with a little help from Torrey’s poa annua putting surfaces. His first putt was decent, leaving him a two-footer to clean up for par. But instead of marking and going through his normal pre-shot routine, Woods quickly sidled up to his ball and gave it a whack. To his horror, that putt careened five feet past, never as much as threatening the hole. His comeback missed too, giving Tiger a dreaded 6 to start the day.

After his round, Woods spoke with ESPN’s Bob Harig and suggested that the poa annua greens were to blame.

“It’s just poa. I tried to ram it in the hole and it bounced, and hit obviously a terrible third putt, pulled it. The second putt … it’s just what happens on poa. I tried to take the break out and it just bounced,” Woods said after the round.

For those who don’t know, po annua is a common grass used on golf courses and especially greens in California, among other places. It grows quickly, a reality that causes poa putting surfaces to get inconsistent and bumpy as the day goes on. In addition, poa greens hold footsteps and other marks longer. All of this can make putting on poa tricky, especially when the course is pressured as it is during a tournament.

Pros have long complained about the difficulty of putting on poa greens, especially from short distances, so this is nothing new. Whether or not it’s truly to blame for Tiger’s four-putt is another question. It no doubt played a factor, but given how bad Tiger’s miss was, it seems more likely that the rush to hit it was the real problem.

And as Woods himself said, the third putt was “terrible” and couldn’t be blamed on the greens.

Whatever the cause, Tiger displayed one of his strongest traits to recover from the disaster on the first hole: resilience. Rather than struggle through the round in a bad mood and miss the cut, he fought back to finish the day with a respectable one-under 71.

With the final two rounds moving to the South Course, Woods has to face the 1st two more times this week, but all the other players do, too. So, though he’s six shots back at the halfway point, Woods is very much in the hunt for a victory.

Interestingly, there is precedence for Tiger making double on the opening hole and winning the tournament anyway, and it happened on the same exact course. At the 2008 U.S. Open on Torrey Pines’ South Course, he made double at the 1st hole three times and still went on to capture his 14th major title.

Woods tees off for the third round of the Farmers Insurance Open Saturday at 10:55 a.m. ET.