PGA Championship 2019: Tiger Woods flirts with disaster in disappointing first round at Bethpage 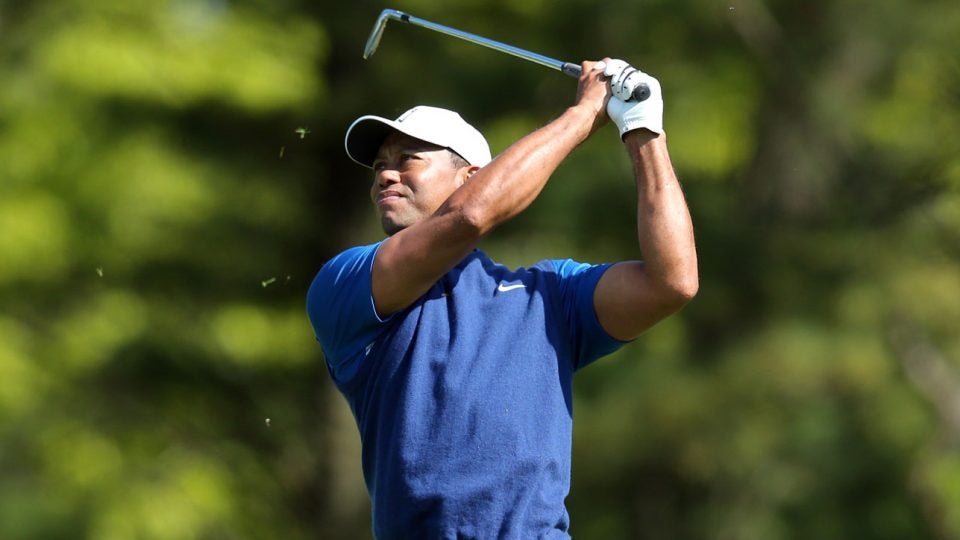 Tiger Woods during the first round of the 2019 PGA Championship at Bethpage Black.
Peter Casey/USA TODAY Sports

Tiger Woods’ first round at the 2019 PGA Championship began with disaster, but the 15-time major champion bounced back late to shoot two-over 72 and give himself a chance over the final three days.

The start to Tiger’s round could have been worse, but not much. At the difficult par-4 10th, his very first hole of the day, Woods struggled his way to an ugly double bogey after his tee shot found the deep rough. It was a significant blow to begin the tournament, but he regained his composure to follow it with four consecutive pars.

The first positive sign came at No. 15. His approach from 208 yards was a good one, finishing 15 feet away. He rolled that putt in with confidence to finally give the New York crowds something to cheer about.

Just when things seemed to be turning around, Woods added another double at the par-3 17th and finished the front nine at three over. Hardly the start he wanted.

But the front nine is significantly harder than the back at Bethpage, so if Tiger was going to make a comeback, the 1st hole would be the place to start. And Woods didn’t disappoint.

After a wayward tee shot left him under a tree, Woods made a nice recovery shot, then drained a 15-footer to get one shot back.

"And he's not even willing to smile about it." Tiger grinding.#PGAChamp pic.twitter.com/vcVNKUEhnZ

He made it back-to-back birdies at 2, where he stuck his approach shot to a few feet.

When his tee shot at the par-3 3rd stopped just nine feet away from the hole, it looked like Tiger was going to make it three-straight birdies to open the front nine. But he failed to convert on the opportunity, settling for a par to remain at one over.

Fortunately, the very next hole presented the easiest birdie opportunity on the course. At the par-5 4th, Woods grooved a 300-yard tee shot into the fairway. From there, he hit a 220-yard approach that finished 30 feet from the hole.

But birdie wasn’t going to cut it. Tiger drained the long curving putt for an eagle. Check it out below.

And just like that, in the span of four holes Woods went from three over and hurting to one under and hunting for the lead with five holes to play.

But the momentum would come to a halt at the 5th, where Woods spoiled his first two shots with a three-putt bogey to drop back to even par.

More disappointment arrived at 7. Woods’s approach shot on the long par-4 leaked to the left, leaving him a 50-footer for par. That attempt came up woefully short, and Tiger missed the 7-footer for par to drop another shot.

Features
Up the road from Bethpage, Tiger Woods’s superyacht is drawing galleries of its own

At that point, missed putts from the 5-10 foot range had become a theme for Tiger’s opening round, and the unfortunate trend would continue at the 8th. He put himself in a tough position with a poor tee shot, and then misjudged his initial lag putt, leaving a familiar 10-foot distance for par. Tiger was once again unable to sink the putt, and instead made his second-straight bogey.

A closing par gave Woods a first-round score of two-over 72. While disappointing, it could have been a lot worse had Tiger not mixed in three birdies and an eagle in the middle of his round. He trails his playing partner and early leader Brooks Koepka, who shot a course-record 63, by nine shots heading into Round 2.

Woods, Koepka and Francesco Molinari tee off for the second round at 1:49 p.m. ET on Friday afternoon.