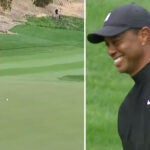 Tiger Woods could only laugh after holing this putt.

Tiger Woods is a student of golf history, so from time to time he’ll drop deep-cut references to tournaments from times gone by, or pay homage to some of golf’s former greats. But if he started Thursday’s Zozo Championship 3 over through four holes in honor of his win at last year’s tournament, well, weird call on his part.

At last year’s Zozo, Woods bogeyed his first three holes at Narashino Country Club before rallying with birdies on four of his next six holes. He shot 6-under 64 for the round, shared the first-round lead and went wire-to-wire for his victory.

This year’s Zozo is at Sherwood Country Club, a familiar setting for Woods. But he had another peculiarly sluggish start off the gettable back nine. He particularly struggled out of the gate on the reachable par-5s, beginning with No. 11, where he had to punch out left-handed, then punch out right-handed. He made bogey.

At No. 13, another reachable par-5, he lost his tee shot right, punched out, found a bunker, missed the green from there, hit a poor chip and missed a putt for a double bogey. Yikes! There he was, 3 over through four holes and in need of a spark.

It didn’t look like it would come at the 14th when his forgettable approach shot found the front fringe. The stats would tell you that three-putting is far more likely than one-putting from there, even for the pros, and Woods had already found his way to a tie for last place. But then…it went in.

Woods managed a laugh as the ball clanked off the pin and to the bottom of the hole. Good for him. Anytime you can hole an 87-footer (per ShotLink), you’d better crack a smile.

But will the long-range birdie trigger the same sort of run as last year’s Zozo? It seems unlikely — but it seemed unlikely last year, too. After all, this is Tiger Woods.