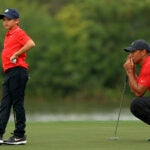 Tiger Woods and son Charlie at the PNC Championship a year ago.

Maybe you have this move, too: You lose something (a favorite putter, for example), you break something (maybe a putter) and the first thing you want to do is replace it. Right?

And so it is for us with Tiger right now — and likely for Tiger, too — as we watch him and root for him to return to something resembling normal life. We want to know: Will he play next week in the PNC Championship with his son, Charlie, as he did last year?

If he does, it’s one more step in our collective effort — for us and likely for Tiger — to bury the frightening memory of his Feb. 23 car crash.

It was on that morning that he drove off a Los Angeles road and into a tree at 75 miles an hour, broke bones, almost lost a leg, totaled a car (the Genesis vehicle that saved him) and changed forever the course of his career and life.

We want so much for that depressing sentence not to be true. But it is.

So suddenly the parent-and-child event, a mellow golfing get-together played each December in Orlando, has become more meaningful than ever before.

But then Earl died (2006). Charlie was born (2009). And eventually it was Tiger and Charlie, most famously at the Masters (2019), gliding toward the clubhouse, Dad’s 15th major in the books, the first Grand Slam win witnessed by Charlie. An epic comeback. Circle of life. The son, by then a father himself, hugged his own son and daughter.

There’s more going on here than we could ever know.

Saturday, at the Hero World Challenge, where Woods was the host, he sat for a half-hour — 30 minutes! — in an NBC Sports broadcast booth, David Feherty to his right and Steve Sands to his left. It was almost bizarrely interesting.

Feherty, one of the wittiest and least serious people in golf, was hanging on Tiger’s every word.

When Woods said his game was in good enough shape to play “hit-and-giggle” golf, Sands said, “I don’t know if you know this or not, but the PNC is kind of a hit and giggle.” He noted that the PNC course is a short one.

“It’s short for Charlie,” Woods said, a nod to the forward tees from which the 12-year-old could play and did play. “It’s not short from where I’m playing. I gotta play back there with Justin!”

Justin Thomas, with whom Woods played at last year’s PNC. Ten weeks later, post-crash, Woods had a surgical rod inserted into his maligned body, along with a series of pins and screws.

Did your mother ever tell you to sit up straight? Tiger never needed to be told. He’s not a sloucher. But his posture in that broadcast tower, seated between Feherty and Sands, was not at all his normal one. He was leaning back, and his chair was a foot or more behind the other chairs, and his head was a half-foot lower than the other heads. No big deal. But not normal Tiger.

Feherty, one of the wittiest and least serious people in golf, was hanging on Tiger’s every word.

A few days earlier, Woods had this press-tent exchange with the golf writer Bernie McGuire:

“Good to see you again at a golf tournament.”

“I was going to ask you, are you in any pain, sitting there now?”

“I don’t want to get too personal, but what are you experiencing there at the moment, sitting there?”

“My back hurts and my leg hurt.”

The man was in pain. He’s likely in pain right now. Chronic pain is a hard, hard way to go through life. Millions of people will testify to that.

Still, Woods gamely went on TV last week, to sell his tournament and his future. He’s been doing it all his life. His life, like Michael Jackson’s life, has unfolded with a camera pointed right at him. It can’t be easy.

In his winner’s press conference, Viktor Hovland was asked what was the most interesting thing he had seen Woods do over the course of the week in the Bahamas.

A telling comment, really. There were only 20 players in the field. The clubhouse, the range, press tent and first tee, they’re all close to one another. It’s an intimate environment. Hovland won the tournament that Tiger hosts. But what he saw was what we all saw, through the power of social media: Tiger Woods on the back of the range, hitting drivers, surely trying to figure out if he might be able to play in next week’s hit and giggle, and get Feb. 23 further behind him.