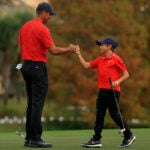 Tiger Woods and his son Charlie at the 2020 PNC Championship.

NEW PROVIDENCE, Bahamas — The latest edition of the Tiger Woods Comeback Tour may be coming soon to a television near you. And it might happen in just two weeks’ time.

Woods is seriously considering playing the PNC Championship alongside his son Charlie, according to multiple sources. One person familiar with Woods’ progress said he’d “test it next week and make a call.” He plans to make an official decision after hitting balls, playing golf and evaluating the readiness of both his body and swing.

The PNC Championship runs Dec. 18-19 and is a 36-hole team event with a field typically comprised of major champions and their parents or children. Tiger and Charlie Woods finished seventh in the 20-team field in 2020.

Why not announce one way or another? Likely because Woods himself doesn’t know for sure. It’s not a lock that he’ll play; his range sessions feature extra breaks these days and he says his stamina is way down. His Instagram videos, like everyone else’s, don’t tell the full story. Still, his eager preparations suggest the tournament is top-of-mind.

On the Sunday before the Hero World Challenge, Woods posted a swing video — just three seconds of him hitting a single iron shot — that sent social media into an uproar. Woods’ condition up to that point was largely unknown; suddenly it was clear how much progress he’d made.

Still, Woods downplayed his tournament readiness when speaking with reporters at the Hero on Tuesday. He made it clear that he never again expected to play a full tournament schedule, suggested he wasn’t close to game-ready and joked about just how short he was hitting it off the tee. But he also left the door open for a possible PNC appearance.

“I’ll put it to you this way, as far as playing at the Tour level, I don’t know when that’s going to happen,” Woods said. “Now, I’ll play a round here or there, a little hit-and-giggle. I can do something like that.”

Woods seemed invigorated by the tournament atmosphere at the Hero World Challenge. After his press conference, PGA Tour cameras captured Woods at the back of the driving range and posted a video of him rifling 3-woods. His swing looked good and it looked to have plenty of speed, too. Later that day he was spotted practicing on site with his two dogs in tow. This is Woods’ tournament, after all. He can make himself at home even when he’s not technically in the field.

Even the fact that Woods is considering this family tournament for his comeback tells us plenty about his current phase of life. It’s no secret how much he and Charlie enjoyed last year’s competition. While previous versions of Tiger comebacks have focused on Torrey Pines or Augusta, this one could take us to the Ritz Carlton in Orlando. (And then, we’d imagine, back to Augusta.)

There are also several details about the PNC that make it more plausible for Woods to tee it up. He’d be able to take a cart, for one thing. The tournament is only two rounds (plus two practice rounds) And because of the format, in which the team can select either player’s tee shot, Charlie could find the fairway from the forward tees and Tiger wouldn’t even have to hit, saving his energy instead for short-iron approaches.

In other words, the fact that Woods is close to ready for an event like the PNC doesn’t mean his return to the PGA Tour is imminent. He has suggested that his endurance is arguably what needs the most work, and walking 72 holes is a significant commitment. Still, it’s a clear step in the right direction.

Speculation has been swirling for weeks on the possibility of Team Woods returning to the event. Justin Thomas mentioned it on the No Laying Up podcast. Golfweek’s Eamon Lynch reported that tournament organizers were holding a spot open for Woods in case he could play. Notah Begay confirmed the possibility earlier this week. And Brandel Chamblee went so far as to say there was “not a doubt in my mind” that Woods would play.

The event itself sent out something of a teaser tweet on Friday afternoon. Retief Goosen and his son withdrew and their spot was filled by Team Beem, keeping the current field at 19.

That leaves one spot conspicuously open.

The rest is up to Woods and his team to decide.