Tiger Woods, Bryson DeChambeau explain frustration with being put on the clock

DUBLIN, Ohio — Tiger Woods and Bryson DeChambeau each spoke out after their first round at the Memorial, expressing frustration with being put on the clock on their back nine. Woods, DeChambeau and Justin Rose were warned about their pace of play and were timed for “most of the back nine,” according to Woods. “That made things a little more complicated.”

Each explained why being on the clock makes things difficult.

“With the conditions the way they are, the caddies are communicating, trying to leapfrog one another, trying to help one another out. We’re trying to either tap out or take a while to mark the golf ball to help the other players. So it’s one of those things where it’s a group effort to try to get back in position.”

Thursday’s conditions contributed to challenges with slow play. Muirfield Village has thick rough and slick greens, and wet conditions gave players and caddies one extra thing to deal with. Plus, as Woods pointed out, the featured group in front of them was playing well, and quickly as a result.

“The group ahead of us, [Justin Thomas] doesn’t take a lot of time, Rory plays quick, and Jordan was 7-under through 13 holes. So they’re obviously playing fast. And we were obviously not.”

Woods explained that being on the clock throws off his cadence of play. Unlike DeChambeau, who prefers to walk fast and play slow, Woods prefers a more even tempo and generally plays quickly once at his ball.

“I did have to speed up. We walked quicker. We got to the ball, slowed it back down trying to get in our natural rhythm. I don’t know if Rosie got a bad [time], but I know Bryson got a bad one over there.”

Woods added that things get particularly complex once a group is on the clock and then someone in that group makes a mistake.

“We’re trying to get back in position, but unfortunately the way things work sometimes, Rosie made a mistake at 2 and ends up making double. I end up in a lip-out on No. 1. That takes a little time for Joey [LaCava] to get a number. And then it snowballs. Bryson hit a ball in the hazard on 5. So did Rosie. So when we tried to speed up and tried to get back into it, we were just — we kept making mistakes to not allow ourselves to catch up with the group ahead of us.” 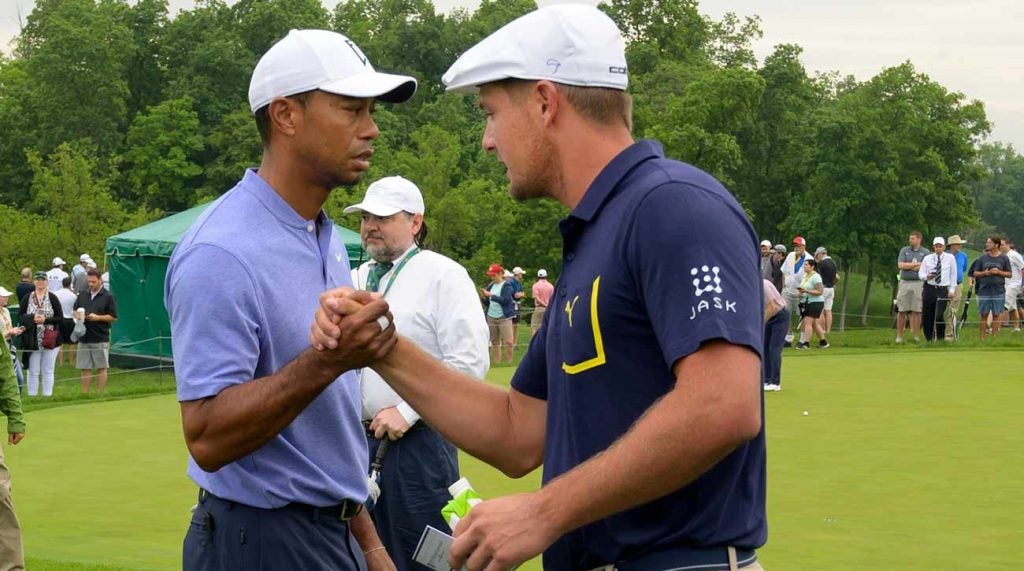 Bryson DeChambeau and Tiger Woods greeted each other before Thursday's first round at the Memorial.
Getty Images

DeChambeau, who has found himself repeatedly involved with issues of slow play, opened up on the issue to Golf Channel’s Will Gray. After receiving a warning for a bad time, DeChambeau made a double bogey.

“We’ve had struggles the past three holes in a row, hazards and making bogeys and all that,” DeChambeau told Golf Channel. “Was that not factored in? ‘Well, it’s just 40 seconds, it is what it is,’ [he said]. Well, I don’t agree with that.”

DeChambeau’s proposed solution includes counting the time between shots, not just the time spent once a player is at his ball.

“It’s a bit unfair when you’ve got someone that’s behind you, let’s say, and they’re slower, but they’re quicker through their process. I get up there in the middle of the fairway and I have to wait for them to go, and then I have only my 40 seconds.”

News
After a first-round 66, Jordan Spieth seems to have left his struggles behind

Woods ended up playing his final four holes in two-under to post a two-under 70 for his round. DeChambeau slipped to shoot two-over 74 and sits T78 after the first round. Their group tees off at 1:16 p.m. on Friday.