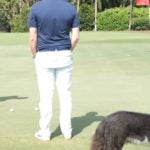 Tiger Woods putts at his backyard practice facility in a recent video.

While Tiger Woods has opened himself up to the public more than ever before during his most recent comeback, he’s still largely a man of mystery. So any chance to get a peek into his life outside the ropes is notable. One such opportunity presented itself this week.

In a series of recently published videos for GolfTV, Woods talks through some of his basic at-home practice techniques. But the location of the video shoot is more important: Tiger’s incredible home practice facility.

When Woods moved to his current home on Jupiter Island, Fla., he quickly got together with his TGR Design team to design the ultimate backyard practice area, so he could work on his game from the comfort and privacy of his own home.

The result (you can see an artistic rendering below) was a facility with multiple greens, bunkers, chipping areas, and grass types allowing Woods to prepare for tournaments with different playing conditions.

In the aforementioned video, Woods can be seen chipping and putting on part of his facility, though we unfortunately don’t get to see the entire backyard, just a peek, along with a few appearances by his dogs, Lola and Bugs.

Through audio hampered by strong south Florida winds, the 15-time major champion reveals that he primarily practices short putts up to eight feet and lag putts, while forgoing the mid-rangers.

“I like to do a desiganted tee drill, line drill and then lag putt to death,” Woods said in the video.

Initially, though, the design of one particular green in his practice area didn’t allow him to practice the longer lags, so Tiger decided to dig it up and start again.

“Originally this green was over in the corner, and it was so limited in what I could do with it,” Woods said. “I could only hit under certain conditions, and I couldn’t lag putt, and so I redesigned it and created this longer green. It still has the drainage, but I’m able to hit longer lag putts and hit to feel.”

You can watch the full video here.