Tiger Woods 40 Biggest Moments: Return from Scandal at the 2010 Masters 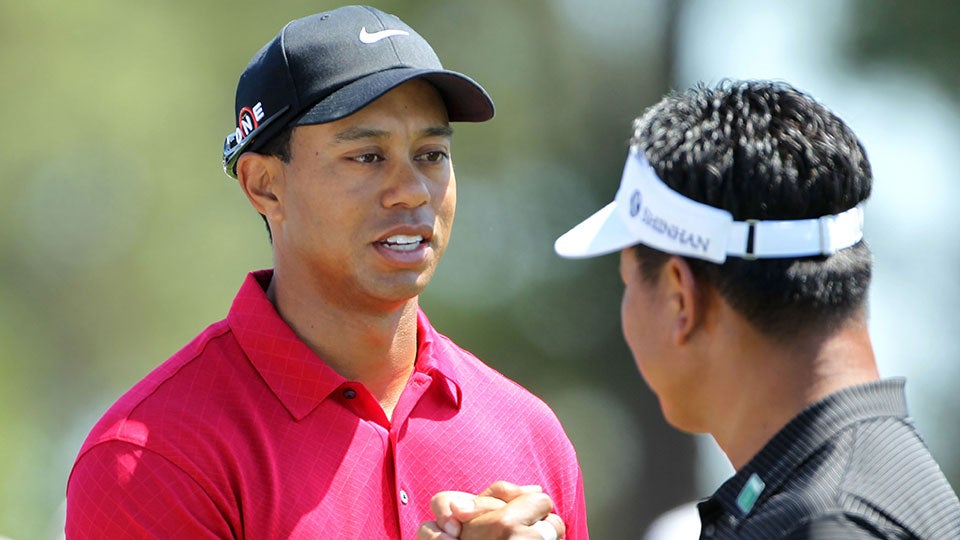 AUGUSTA, GA - APRIL 11: (L-R) Tiger Woods and K.J. Choi of South Korea shake hands before teeing off on the first hole during the final round of the 2010 Masters Tournament at Augusta National Golf Club on April 11, 2010 in Augusta, Georgia.
Jamie Squire/Getty Images

Four months after he’d hit a hydrant, bending a fender and setting off a scandal that sent his world into a tailspin, Tiger announced that he’d soon be returning from self-imposed exile.

And what better pathway back than Magnolia Lane?

“The Masters is where I won my first major, and I view this tournament with great respect,” Woods said in a prepared statement. “After a long and necessary time away from the game, I feel like I’m ready to start my season at Augusta.”

Left unmentioned by Woods—but widely remarked upon by the press—was that Augusta also offered a safe haven, a place apart, hushed and private, cocooned from the usual tabloid frenzy.

Not that his peccadilloes would go forgotten.

Reminders even came from inside the gates.

In a pre-tournament address, Augusta chairman Billy Payne tut-tutted that Tiger had fallen short in his duties as a role model and had “disappointed all of us, and more importantly, our kids and our grandkids.”

In the court of public opinion, it appeared, Woods couldn’t win.

He didn’t win the tournament, either, but he acquitted himself well, piecing together rounds of 68, 70, 70 and 69 to tie for fourth with K.J. Choi.

For Woods, of course, anything short of victory was never fully satisfying, and one suspects it galled him to see the green jacket go to his chief rival, Phil Mickelson.

The temptation for some was to package the results as a morality play (the family man over the philanderer), but not everyone bought into that angle. As the Telegraph of London sarcastically noted in a story critical of what it depicted as the holier-than-thou treatment that Tiger had received, “The US Masters got the champion it wanted. Phil Mickelson, devoted husband, loving father and antidote to that rampant individualist Tiger Woods.”