Tiger vs. Phil is a TV event, a gambling event and a head game all rolled into one

The heavyweights are about to step into the ring. Tiger vs. Phil, in Vegas, only pay-per-view. Creed II is in theaters now and Mickelson did the smartest thing he could do, in the interest of a getting this new franchise off the ground. He bet Woods $200,000 that he would birdie the short par-4 first at Shadow Creek. He knows he has maybe a one in three chance of making a three there. But Phil is playing the long game. Pay-per-view is not that old Thanksgiving standby, the Skins Game, with Jack and Arnold and Gary and Tom. Those early shows were on NBC and you turned it on when you felt like it because the meter wasn’t ticking. Pay-per-view you watch from the start or you don’t watch at all. Phil, in addition to being an excellent golfer, is a plus-four talker. He’s a carnival barker. High Noon, baby—Vegastime.

The Skins Game show was, weird to say, all about family. Your father-in-law rooted for Arnie and you rooted for Watson, he on the Barcalounger, you on the saggy sectional. Other members of la famille watched, too, even if they had no interest in golf. That’s so yesterday. This thing—The Match—is all about golf, about money, about the updated odds crawling across the bottom of your screen. This is the future. Gambling on sports has had a dark, seedy and exciting past and it will have a bright and corporate and numbers-driven future. What are Justin’s Tucker’s field-goal kicking odds from 40 yards? How does that change in the fourth-quarter off turf when the wind is against him? Justin Thomas, first round at the Honda, looking at an eight-footer. Make or miss? Let your fingers do the betting. And the Thursday viewing numbers are crazy.

The house wins. The house always, always wins. Phil, here, is the house. Woods is his reluctant partner. In their pre-bout press conference on Tuesday, Mickelson did 75 percent of the talking. (What was the under-over on that?) Woods didn’t even pretend to be interested, which is amazing, because Woods is a superb actor, when he has the right motivation. Tournament golf on the PGA Tour is about the tedium and greatness of 72-hole, four-day stroke play events. Over the past 20-plus years, Tiger Woods has proved himself to be one of the greatest ever at this deceptively grueling sport. According to Phil Mickelson (and many would agree), Woods is (to borrow a choice Ali phrase) the greatest of all time. Mickelson, over the past 25-plus years, has shown he is one of the greatest of all time. The sheer length of his sustained excellence is a tribute to his ability and drive, time in the gym and on the range, good genes and some other things. The most telling thing at the Tuesday press-conference (the presser!) was how both contestants ignored the question of whether they would still be going mano a mano if they were playing for $9 million of their own money instead of ours. 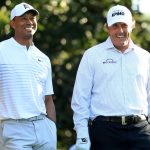 You may also like How to stream the Tiger vs. Phil match

The actual answer is obvious. They would not. Because they’ve worked far too hard to get $9 million out of Tour purses and endorsement deals and appearance fees and all the rest and into their private accounts to risk it on the outcome of a single day. Don’t expect a personal thank-you from either of them for your $19.99 contribution. Entertainment, sporting or otherwise, doesn’t work like that. When 1.5 million people went to American movie theaters to watch Ali-Frazier in 1971, do you think they got cards in the mail later? It was a risky proposition, taking the fight off broadcast TV, but it worked, in part because the two gents were at the height of their powers, and because the two men seemed to truly despise each other. You can get killed in a boxing ring.

This golf match is tricky for a lot of reasons, and a small part of it is because the two combatants are at the very least pretending to be chummy. Plus, the stakes are actually low. Also, their professional lives have unfolded, for the most part, on broadcast TV. Now we’re being asked to pay upfront. The actor Michael Douglas was on with Stephen Colbert Tuesday night (CBS), talking about how hard it was for him to make the transition from being a TV star to a movie star. “Television,” he explained, “they see you for free. Movies they pay to see you.” We’ve been paying to watch Phil and Tiger for years, but it has been so indirect we didn’t even know it. For this event, we have to get out our credit cards.

Mark Steinberg, Tiger’s agent, is doing his part, to promote Capital One’s The Match (its full name) and lay the groundwork for future ones. There were more direct quotes from him in a recent (and excellent) Golfworld piece about the mechanics of The Match than you might have ever read before. Steinberg helped orchestrate the seven years in which Woods was involved in a series called Monday Night Golf.

“We created those ‘Battle’ programs years ago, and Tiger was in the prime of his career, but we’re coming at this event differently,” Mark Steinberg told Golfworld. “This is going to be fun. This is a TV show. That will make it more sustainable. You’ll see things that you just won’t see on a Sunday at a regular tour event. Are they going to want to beat each other’s brains in? Absolutely. They’re there to compete. But they’re going to have a hell of a lot of fun, and it will be different start to finish. The battles back in the day were more about competition. This has other elements that make it entertainment, too.”

But nobody is working the promotion of this event more than Mickelson. In the Tuesday press conference, he talked about the FOMO. (”The FOMO is real—the fear of missing out is real,” Mickelson said, as an incentive for watching. FOMO is a first cousin to this old Saturday night question: “Is everyone having fun without me?”) Phil has been particularly voluble on the fun business of side action, which he, likely respecting the language wishes of a small army of lawyers and PR advisors, kept referring to not as “bets,” the common everyday word, but as “challenges.”

Julie Elion, a mental coach who works with a number of PGA Tour players and who used to work with Mickelson, said in a recent interview that FOMO is a real phenomenon, but that’s not why she’ll be watching the event. Her interest in it is a how it will reveal the difference between stroke-play golf, the Tour’s bread-and-butter, and match-play golf. “One of the things that interests me here is that they are both going in sounding supremely confident,” Elion said. She said that’s not always, or even often, the case, in any head-to-head competition. Self-belief, in a one-on-one competition about two closely-matched athletes, has a great deal to do with who wins and who loses, Elion said. In other words, this event is a head game. 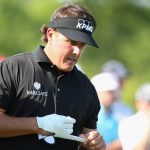 You may also like Win Phil's glove! Play our free 'Match' fantasy game for a chance to win cool prizes

Match play has always been golf’s gambling game and gambling in golf successfully of course requires not just golf skill but psychological warfare, too. Once, when he was an old man, I played Sam Snead, straight match, $100, Snead giving three a side. I was three up through four and on the fifth tee Snead said, “You a twelve?” By the eighth tee he was one down. All he needed was three words. Tiger is better at golf but Phil is better at talking. Tiger has logged a lot of time at Vegas tables, but Phil is super-fluent in the language of sports gambling.

Responding to a question, the first one asked, about Vegas sportsbook odds, which had Woods as roughly a 2-to-1 favorite, Mickelson said on Tuesday, “Strategically, what happens here in Vegas, as I don’t have to tell you, is that the smart money tries to fudge the line, and then they load up. And now that the line is where they want it, it will come significantly down.”

It can be intimidating for anyone, anytime you’re in the company of anybody who knows so much about any given subject. Phil Mickelson has been playing money matches, and figuring the odds, all his life. This whole thing is his show. Having said that, Tiger Woods didn’t look too scared. Then again, when does he?