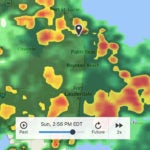 The weather might not cooperate for The Match: Champions for Charity.

Sunday’s The Match: Champions for Charity, featuring the team of Tiger Woods and Peyton Manning taking on the team of Phil Mickelson and Tom Brady, will be played at Medalist Golf Club. At 3 p.m. in Hobe Sound, Fla.

Which are the time and location of a thunderstorm.

The likelihood of the storm increases as Sunday goes on, according to weather.com. There is a 50 percent chance of storms starting at 11 a.m. ET, then a 100 percent chance from 2-4 p.m. The percentages begin to fall at 5 p.m., but sunset is 8:06 p.m.

Should the match-play event not be played on Sunday, it will be moved to Monday at a time to be determined.

“If the match is suspended due to adverse weather on Sunday and cannot resume that day, it will be resumed on Monday (May 25) at a time to be announced,” the PGA Tour’s website says.

Your Memorial Day could feature a round of golf.

Though there is a high chance of rain in Hobe Sound on Monday, too. And no word on a plan should play also be stopped then.