Three things to know after Round 1 of the Safeway Open 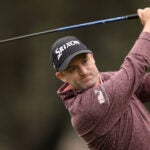 Russell Knox hits his tee shot on the 14th hole at the Safeway Open on Thursday.

The leader, the three players tied for second and the two players tied for fifth made 44 birdies. They made one bogey. They have found a safe way at the Safeway. Here are three things you should know after Thursday’s first round at the Safeway Open at Silverado Resort and Spa North in Napa, Calif., the first event of the PGA Tour’s new season.

The one bogey led to one leader.

Russell Knox shot a 9-under 63 to grab a one-shot lead over Sam Burns, who bogeyed his second-to-last hole; Cameron Percy; and Bo Hoag. Knox birdied the 4th, eagled the 5th and birdied the 6th as part of a seven-birdie, one-eagle, no-bogey round.

“Obviously whatever happens the rest of the week, I managed to shoot a great first round, which is nice, you feel like you’re obviously in the tournament,” Knox said. “I don’t know if I’ve ever actually led after day one in my nine years out here, so that would be kind of cool.”

Several are in contention

At 7-under are Pat Perez and Brendan Steele, a two-time Safeway winner. At 6-under are Tom Hoge, Scott Harrington, Andy Zhang and Akshay Bhatia, an 18-year-old professional who has missed the cut in all seven of his PGA Tour events.

Phil Mickelson is eight back

Phil Mickelson, fresh off a victory on the Champions Tour, is eight strokes back after a 1-under 71.

“Yeah, I let a lot of shots go today, which was disappointing, and I didn’t drive it well on the front nine, for sure,” he said. “For me to shoot under par, it’s actually a mini victory in that I didn’t shoot myself out of the tournament. I’ve got to go shoot 7, 8 under par tomorrow to get in it for the weekend, but it’s very doable. I’ve actually have been playing well enough to do it, but not today.

At 1-over is Jordan Spieth.