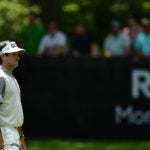 Bubba Watson walks along the 6th hole while spectators look on from just off the club's property.

DETROIT — The phrase has been used endlessly in pop culture. It’s quiet … too quiet.

Where it originated is hard to tell — probably in a 1930s Western flick — but it’s the most apt way of describing the scene this week at Detroit Golf Club. It’s so quiet it might be … too quiet. Without the shushed murmurs of fans, the constant hum from concessions and hospitality tents, and even the all too common calls of “Mashed Potatoes,” every sound — slight or great — is magnified on the PGA Tour these days.

Friday was cut day, both for the players on the course and for a local lawn care company with clients along the 7th hole. Indeed, we saw many players deal with the 90 or so decibels that mowers emit, just like you and I do at the local muni. Hours later, one child offered his best imitation with a plastic lawn mower. It buzzed and buzzed and buzzed, but Brian Harman, well within ear shot, made his three-footer for par. Unfazed.

That 7th hole was the loudest quiet spot on Friday. Gorgeous houses line the entire hole. The kind with backyard pools, patios and outdoor televisions. All the amenities. Only those TVs are better off on mute this week. It’s impossible to say whether Rory Sabbatini’s squirrely approach was affected by the Golf Channel coverage emanating from the nearest backyard, but he definitely heard it.

Just moments earlier, a bang echoed throughout the front nine. Tom Hoge had heaved a half-full water bottle at the garbage can 15 feet away. It didn’t swish. They probably didn’t hear it on the back nine, but they sure might’ve. The clang held up Tony Finau’s group momentarily on the 8th tee.

The 7th hole’s biggest competition was the 12th tee, where a group of 10 had elevated views thanks to five feet of scaffolding. Watch a little Tour golf there and it’s hard to imagine doing anything else on a sunny day in July. These are the best players in the world, after all, and the homeowners and their guests enjoyed seeing them struggle on the long par-3 11th.

“You know, you guys are not supposed to be here,” Aaron Baddeley said jokingly. “They said no fans.”

Baddeley’s jovial nature was typical of the Tour pros who came through the 12th Friday afternoon, but not all. One of the homeowners had whispered ever so softly about Cameron Tringale’s shirt while he stood over his ball. She liked the look of it. Did he hear exactly what she said? He heard enough to step off the shot while his caddie asked the volume be turned to zero. Tringale had just bogeyed the 11th, but he reset calmly and uncorked a 330-yard bomb.

We’ve seen this scenario play out over most of the PGA Tour stops thus far. While the host tracks are generally lined with some fencing and signage, willful golf fans at the Fort Worth and Connecticut events took the fencing as inspiration to build their seats a little higher. On some level, the players gotta appreciate it.

But what about those actually on-site? A couple hundred lucky volunteers aid the tournament staff this week, but they must be careful. Twigs and leaves become tricky little land mines whenever a player is nearby. They’ll tell you that being on site is nice. You see everything and hear many things, but it implies being seen and being heard.

Despite the loudest generator on the course sitting behind the 7th green, it apparently didn’t keep Luke List from hearing a faint conversation between two volunteers Thursday afternoon. According to one of them, little more than a whisper had irked List, who missed a 7-footer for birdie. When he voiced his displeasure en route to the 8th tee, it was ironic, of course. Usually it’s the volunteers begging for complete silence.