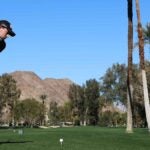 Every hole at La Quinta Country Club, Patrick Cantlay said, is “a birdie hole.” “Especially if you drive it in the fairway, and like I said it’s in such good shape that if you start to read the greens really well, it’s easy to make a bunch,” he said. And make birdies in a bunch he did. Here are three things you need to know after Thursday’s first round of the American Express, played at La Quinta, the Pete Dye Stadium Course and the Nicklaus Tournament Course, in La Quinta, Calif.

And nowhere more did Cantlay and Lee Hodges birdie-binge better than on the front nine at La Quinta. Cantlay birdied 1, 3, 4, 5 and 7 and eagled 6 — or played his first seven holes in seven-under — while Hodges birdied 2, 4, 6, 7 and 9 and eagled 5 — or played holes four through nine in six-under — and they each finished with 10-under 62s and a two-shot lead over K.H. Lee and Cameron Young.

“It’s one of my favorite golf courses I’ve ever played, to be honest,” he said. “I played it, I guess, three times now, and it’s spectacular. It’s like hitting off of mats half the time. It’s just in perfect shape. You get rewarded for good shots out here, which I like that. Good golf gets rewarded.”

“I got off to a roll at the start and kind of made a bunch of putts and then I kind of lagged on the way coming in,” Cantlay said. “But I was happy with everything, I thought I did everything well, and it’s a golf course I really like, it’s in perfect shape, and so if you get the ball rolling on line, it should go in.”

K.H. Lee and Cameron Young are tied for second

Also, James Hart du Preez, at 6-foot-9, the tallest player ever to play a PGA Tour event, shot a four-over 76. He hit his second shot into the water and played his first two holes at three-over, then settled down from there.