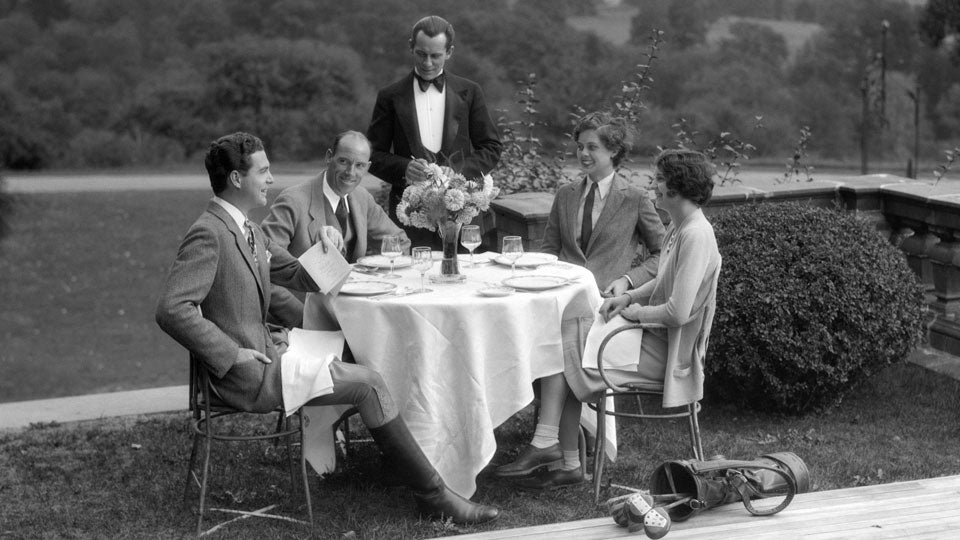 "I must say, Annabelle, old girl, I'd rather choke on my beef Wellington than get stuck with that ghastly caddie again."
Getty Images

They see themselves as superior. But you recognize them as a sad golfing sub-species. Behold, the snooty cast of characters who give an otherwise great game a bad name…

It was on this very site, 150 years ago, where Old Tom Morris and Willie Park bested Sir Robert Hay and Alan Robertson in a match so epic it came to be memorialized in a painfully detailed Tennyson poem, which your tweedy companion will now recite.

He can trace his blue-blood lineage directly to the Mayflower, a ship that must have been a barrel of laughs compared to the stuffy, lifeless club where he wiles away his days.

A proud pace-setter, he tees off in the gloaming and wraps up his 18 before you’ve had your morning coffee, leaving him the entire day to sit around complaining about how slow everybody else is.

When he isn’t busy trying to be the ball, he’s spouting New Age mumbo-jumbo that makes him sound like Shivas Irons on ’shrooms. Where you see golf as a way to get fresh air, he regards it as a chance to “commune with nature.” There’s “one-ness,” he insists, in the trill of birdsong set against the soft sounds of your footfalls, and signs of the divine in the dew-streaked course at daybreak. Or something like that. You tuned out hours ago.

Though he plays all his golf at exclusive private courses, he insists that his favorite venue is actually an unsung seaside track in Scotland with a surly starter, goose droppings on the fairways and low-slung electric fences to keep smelly local ruminants off the greens.

Having swallowed a thesaurus at some point during childhood, he still speaks in overblown poetic lingo, every phrase a stilted paean to the past. He refers to golf as “the game of golf” and relies heavily on the phrase, “I had the great good fortune of.” As in, “I had the great good fortune of using the same locker room urinal from whence Bobby Jones once relieved himself.”

Did you know that the par-3 you’re playing pays quiet homage to the original Redan hole at North Berwick, an iconic design that served as inspiration for C.B. Macdonald’s treasured work at National Golf Links, to say nothing of the famously canted surface of the 7th green at Shinnecock Hills? Well, now you do, old chap.

There’s room in his group. You just can’t join. You’re welcome, however, to play behind him as a single for the next five hours.

The special logo emblazoned on his shirt, towel, bag and clubhead covers isn’t available to the general public. It’s reserved exclusively for those who belong to his old-money club, a place so unwelcoming to outsiders that most normal humans would never see, much less recognize, his stupid emblem anyway.

An insatiable thirst for the latest and greatest prompts him to swap out his equipment more often than his home course aerates its greens. His irons? Custom-fashioned. His putter? Laser-fitted. Somehow, he got his hands on the year’s most hotly anticipated driver, even though it’s still in R&D.

He belongs to more clubs than he has irons in his bag. And he’s happy to tell you all about them. Without inviting you to a single one.

Though he only hits one of five fairways and flies his drives 230, max, he’s convinced he bombs it like a Tour pro. “I wanna see the whole course,” he tells you on the first tee, and he does, on his way to shooting a sporty 109 from the tips.

Not only has he knocked off the Top 100 Courses in the World, he also has left all the tags on his bag to prove it.

A single-strap leather carry-bag slung over his shoulder, he restricts himself to walking-only, pre-World War II courses. He prefers eyeballing distances to reading yardage plates and seems to genuinely believe, against all reason, that shanking a feathery into the trees with his great-grandfather’s hickory-shafted baffy is more fun than bombing a ProV1 300 yards right down the pipe.

If there’s one thing he enjoys more than optimal launch conditions, it’s a spirited online debate about the effects of temperature and barometric pressure on spin rates and MOI. Oh, and did he show you his new handheld GPS? It displays real-time 3D images of any hole he’s playing on a hyper-vivid, 258 mAh digital touch-screen, with distances calculated to within a fraction of a millimeter. Unfortunately, it’s no help in recovering the tee shot that your pal just topped into the pond.

He’s spent so many years lurking on the margins of the industry that he’s come to believe he’s a major player in it. Refers to “Jack” and “Arnie” as if he’s got them both on speed-dial, and inserts himself into stories involving them that aren’t nearly as entertaining as they are sad.

An equal opportunity blowhard, he treats all club employees like indentured servants. The fault for every shot he misses lies squarely with his clubs or his caddie, who, of course, he never fails to stiff.

Endowed with a big bankroll but lacking the right pedigree to join one of the grand old clubs, he compensates by picking up the most expensive membership new money can buy. Sure, it was spendy. But the seven figures he shelled out in initiation dues gains him access to a perfectly verdant course with waterfalls on top of waterfalls and a clubhouse modeled after the Taj Mahal, with a heli-pad out front that he uses on weekdays, because, you know, even when you drive a DeLorean, sitting in traffic can be such a drag.