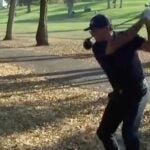 Phil Mickelson hits his second shot, with a driver, on the 16th hole at Silverado Resort and Spa North.

Phil Mickelson, on his tee shot on the par-5 16th at Silverado Resort and Spa North, swung, stepped away and pointed his left arm out to the left. For emphasis, he’d lift his left leg.

Mickelson started walking ahead during the second round of the Fortinet Championship and exhaled.

Fore left. Hit a tree. And a deep sigh. You hate to see it. But with Mickelson, something you rarely do usually is right around the corner.

On Friday, it was a full-swing driver, from 367 yards out, on hardpan and leaves, among the trees. Mickelson sliced it between two, it ran out to 283 yards — 67 yards longer than his tee shot — and he was left with 78 yards on the 580-yard hole.

“This is an unbelievable shot,” analyst John Wood said.

“Shot of the day,” an announcer on PGA Tour Live said. “Are you kidding me? That was stupid what he tried to do.”

Indeed. On his third shot, Mickelson would hit short of the hole, but he’d roll in the 19-foot putt, pump his left fist twice and mark down a birdie four. He’d finish with a three-under 69 and is seven shots behind leader Maverick McNealy entering the weekend.

“How many examples of the Phil birdies have we gotten through the years?” Gannon said on the Golf Channel broadcast. “That was one of them.”

“I was just thinking the Ryder Cup came to my mind,” Immelman said. “I was like, imagine playing match play against this guy and just made a birdie like that.”

“I know you set out and you say I always expect my opponent to do this or that,” Gannon said. “Well, with him, you don’t know what to expect.

“I’m not sure he knows half the time,” Immelman said.